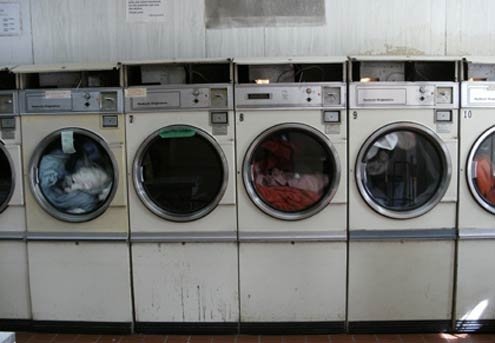 The joys of New York laundry.
I

t was always bound to happen: My American friends in Rome have started flocking to New York. (If they could, Italians would follow).

The first to go, my boyfriend, had spent seven years in Rome. He needed an environment where he could focus on expanding his internet-based company. A place where both entrepreneurial energy and reliable Wi-Fi thrummed. A place where his time wouldn’t be eaten up by waiting in lines at banks or being put on endless holds with Telecom. He yearned for hard work and productivity, which are typically American pursuits. He left for New York City in May.

A good friend of mine packed up the same week. Jennifer loved everything about Rome. But after dealing with the financial and professional struggles of a freelancer writer’s ad-hoc existence, she was offered a job editing a beauty website in Manhattan. She took it.

A third friend emailed me today. Based in Rome on an academic fellowship, she is also a tour guide, a blogger, is busy writing a young adult novel, and works remotely for a startup that happens to be based — you guessed it — in New York. To give the latter her all, she’s giving up Rome.

Forget the modern idea of eating, praying, and loving under the Tuscan sun. These days, the migrations of those around me seem more like something out of the 1920s, an era when Italy was an “Old World” of few jobs and fewer hopes… and America was the land of opportunity, the place where streets (if not pockets) were paved with gold.

In some ways, that imbalance has never changed. The only difference was Italy’s 1990s rebirth, at least in world perception, as a lush, wine-soaked land in which everyone wanted to vacation. Preferably forever, if you could swing the whole living-on-retirement-funds or managing-an-Italian-farm thing.

Hollywood-fueled fantasies aside, opportunities are rarer in Italy — especially with the euro crisis. They’re rarer still for those who don’t want to simply slide into the existing system, but want rather to start their own companies or technologies, or at least shake up what’s there. The recession may have dented Americans’ own perceptions of their country, but the United States, not Italy, remains the place that values, and hires for, innovation.

It’s not just job opportunities luring my peers back home. Being near family and friends helps (though two of the three New York “immigrants” are from California and the third from Minnesota). But under it all, the most powerful attraction is the absence of Rome’s inconveniences and illegalities.

Or so people think.

I thought so, too. The first time I visited friends in New York from Italy, I was dazzled by delivery. You could order any kind of food, online, at any time of day or night? And pay with a credit card? And they’d be at your house within a half an hour? Twenty minutes and two bites into my tikka masala, I was sold. For a moment, I reconsidered my choice to live in a city where finding a hot meal between 3 p.m. and 8 p.m., never mind having it delivered, is all but impossible.

But there’s another side to the coin, and it has nothing to do with liking Rome’s beauty, history, food and people.

One night, after catching a movie in New York, my boyfriend Steve and I decided to grab dinner. It was 10 p.m., an hour in which most Rome restaurants would still be buzzing. But in the heart of hip downtown, across Chelsea and the West Village, one place after another had shut for the night. We were debating whether to give up when the eighth place we asked, a sushi bar, agreed to let us be the last table. I’d known that, contrary to the moniker, New York wasn’t “the city that never sleeps” – but I hadn’t expected the inconvenience of it going to sleep so early. All-hours delivery suddenly made a lot more sense.

Then there was the laundry. Steve’s management company equipped his apartment with a dishwasher and a microwave (neither of which he uses), but a washing machine? Not a chance. That’s out of the question for most Manhattan dwellers. Since the closest Laundromat is a 30-minute walk and a three-hour investment, he’s gotten in the habit of saving time, if not money, by having his laundry picked up and done for him.

What could be more convenient? I was also sold on the idea — until the company, which had assured us we’d get our laundry back within 24 hours, left us without clean bath towels for two days. As I dabbed my dripping, post-shower self with a tiny hand towel, I took to grumbling. Customer service might not be so great in Italy, but at least you know what to expect.

Two weeks into my New York stay, I’m getting used to the idea that the city might be the home of 24-hour delivery but not the land of perfect convenience.

That realization has taken some of the shine off of my New York fantasies. And made me want to warn other Italy-dwellers who want to jump ship.

It’s also made me feel more at home.