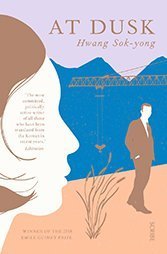 By Hwang Sok-yongis, translated from the Korean by Sora Kim-Russell

Hwang Sok-yong is considered by many to be South Korea’s preeminent writer of fiction. His work is careful, measured, and attentive to the vicissitudes of his homeland as well as its place in the world. This is in keeping with complications of his past. Born under Japanese occupation, he gradually established himself not only as a writer but as a political activist, serving a five-year prison term for traveling to China and North Korea in the 1980s.

In this short novel, he introduces architect Park Minwoo, an accomplished professional who nonetheless cannot come to terms with the ripple effects modernity has sent coursing through all levels of social life. He recognizes that architects are widely admired for creating edifices that endure. But what if what lasts is “greedy and ugly”?

Through Park, Hwang launches understated attacks on all aspects of progress. They’re never crude or even outraged, more often resigned, and the story opens with a deft portrait of village life that’s high on nostalgia. It’s soon clear that the “new” South Korea has come at the expense of the South’s soul. Park is on the ropes early on. If it’s true buildings are made from “space, time and humanity,” can he really be sure his structures possess the latter?

As is often the case in both Japanese and Korean literature, the old is unable to make peace with the new, leaving the likes of Park in a state of permanent estrangement.

The story hinges on Park being forced by circumstances to return home and review his past, giving Hwang room to open door after door into what amounts to a lost world.

This sentimental emphasis allows few surprises. Park’s updated village now looks like one of many, as if “me and my long-departed parents had never really existed.”

Another character, struggling stage director Jung Woohee, will make an appearance. Young and frustrated, he helps question whether the country can give its youth a fulfilled (and creative) future. The two men’s stories will entwine, mixing old and new.

While some of Hwang’s anecdotes are deeply moving, the prose is too Spartan, the framework too narrow, and the sense of regret too weighty to allow for transcendence. At times, melancholic memories can be their own worst enemy.