Assassins on the loose 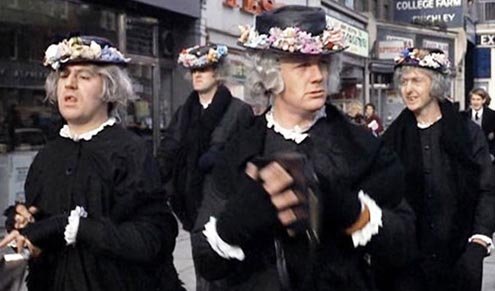 Unless Italy takes action, it could be in for a branch of Hell's Grannies.
I

taly has a problem with organized crime, but not in the way you might think. Yes, the Mafia, but there’s another, more established group busy terrorizing the country: mean old ladies, or MOLs.

You might think I’m just being an insolent youngster. Or tell me that every country has its share of MOLs. To which I reply, “Probably. But Italian ones are disproportionately good at what they do, not to mention extravagantly vocal.” For some reason, the Italian branch of this global terrorist network believes that just being Italian justifies a special brand of snappy invasiveness. These skills are on brilliant display when MOLs take to judging youth, their bread and butter.

These are strong assertions, I know. You’ll want to fact check me. First, though, here are just a few supporting scenes based on personal experience.

Scene 1: The tram. This is a classic. A youth is sitting on a tram or bus when an MOL boards with a grocery cart. She looks around in search of the seat to which she’s entitled. Avoiding eye contact with seat-seeking MOL’s is impossible. Once they spot you, you’re doomed. You can see their disgust. Here you are, a measly little youngster, taking a place any mean old lady would see as her birthright. It doesn’t matter that every other seat is taken or that she got on so fast you didn’t have time to get up. All that registers on her MOL radar is that you’re enjoying the fruits of life at her expense.

Wasn’t it bad enough that her baker’s remedy for the backache caused by her fishmonger’s cure for ankle pain didn’t work? No. Making matters much worse here you are in her seat seeming carefree and happy. So, notwithstanding her painful ailments, she’ll summon the energy needed to hobble over just to glare at you.

By this time you’ve obviously stood up and offered her the seat, but that won’t erase lifetime memories of her piercing stare. From now on all old ladies will make you wary.

Scene two: You’re on a battello, a Venetian waterbus. With you are two friends, one of whom is wearing a modest floral pattern dress, something suitable for a tea party. Your friends are American and you’re all speaking English. About halfway through the ride, an MOL boards with her companion. She looks in your direction and produces a scornful scowl. She begins disparaging your friend to her friend. E poi questa Americana vestita come per andare in discoteca, ma ti pare? Except that you speak Italian and know she’s accused your friend of wearing a disco party outfit. So you jump in and politely defend your friend and her nice floral dress. Call this the awkward boat ride scene.

Scene three: A few days later you’re on a bridge with the same two friends when an MOL approaches to ask where you’re all from. You explain that they’re American but you’re also Italian. Hearing this, the MOL has other ideas. No, you’re not Italian, she informs you, you’re Spanish. You gently insist that you know your nationality but it’s useless. She ignores you, insists you’re Spanish, and finally walks away in a huff, angry glare included.

Scene four: You’re again on a bus, speaking in English. An MOL comes up to you and asks if you happen to know the route of the 84 bus. You tell her and return to speaking in English. By chance, you later end up on the 84 together and she calls you over. She wants you to know that when you speak in English your voice sounds nasal and unattractive. You should stick to Italian.

Let me conclude by saying I know that not all elderly women are MOLs, but the scales are beginning to tip in their favor, which is why I urge official action to break up the formation of roving gangs (something along the lines of Monty Python’s Hell’s Grannies). Also, it’s true: I’m half-Italian (when I’m not Spanish). I’m letting you know hoping it cuts any future meanness by half.