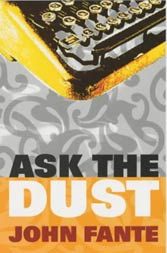 Italian-American John Fante has been repeated hailed as one of America’s greatest — and most underappreciated — writers. “Ask the Dust,” the third of four novels whose protagonist is down-and-out aspiring writer Arturo Bandini was published for the first time in 1939, but didn’t achieve wide acclaim until it was reissued in 1980, when Fante was in his 70s and struggling with diabetes-induced blindness.

In it, Bandini, age 19, has left his immigrant parents in Colorado and is surviving, barely, in an L.A. flop-house on bags of oranges and the odd, drawn-out cup of coffee at the local bar. He violently falls for the Mexican waitress, Camilla Lopez, and inflicts his fragile ego on her for the rest of the novel.

Vacillating between seething riffs of self-hatred and hilarious delusions of grandeur, Bandini is like a character out of an Italian opera. The language, though, is fresh and real. Bandini’s raging narcissism doesn’t make you love him, but for a plunge into the hearts of those who “went West” during the Depression, it doesn’t get much better than this.