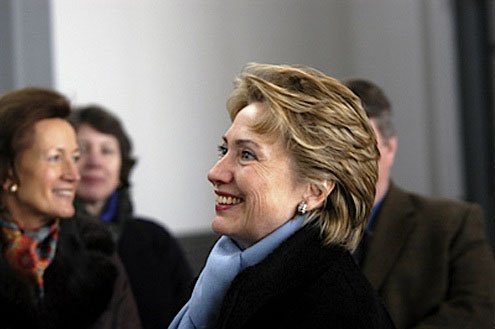 Hillary Clinton and John McCain are two members of the increasingly wild bunch seeking the 2008 White House.
B

ack in the U.S. for the holidays, it was impossible not to notice the political jockeying for the 2008 presidential race had begun with gusto. Talk shows and articles set the tempo as potential candidates coyly dipped their toes in the water to test the temperature. Since then, toe-dipping has turned into wading.

Some would argue the upcoming election is the most important in the nation’s history, or at least since Lincoln returned to the White House for a second term to seal the country back together. Over the next 20 months, thousands of polls, predictions and opinions will post until the last state’s vote count is in, all of them claiming insight as to who will become the next president of the United States.

But if you really want to know who will win the presidency in 2008, it’s simple: all you have to do is ask my mother.

My mother is a lifetime Republican, who since George W. Bush took office has become part of the collective voting conscience that re-elected the president and subsequently evicted the Republicans from the House and Senate.

My mother is 63, white, born of Italian and Pennsylvania Dutch (meaning German) parents. She believes in God and Jesus Christ but doesn’t go to church. She travels a fair amount but has lived her entire life in or around a small, conservative southeastern Pennsylvania city. She thinks Fox News’ Bill O’Reilly tells it like it is, though her heart forever belongs to the late Peter Jennings of ABC.

In my family — my mother, father and I — the political spectrum is broad. My father pledges allegiance to the big business/low tax faction of the Republican party, mainly because he credits Ronald Reagan with our family’s leap from solidly working-middle class to solidly lower-upper middle class. Also during Reagan’s tenure, my father inherited enough money to make small investments, which he steadfastly believes are safeguarded by the thriftiness and business practicality of Republicans. Consequently, he believes those same interests are under constant attack from tax-raising, spend-happy liberal Democrats.

I do not believe this. I am one of those liberals.

That said, I don’t consider myself a de facto Democrat. In fact, any extremes in my family tend to find common ground in a libertarian grey zone in which my father and I agree to mutually mistrust all parties.

The only election in which I voted was in 2000 when I cast my ballot for libertarian presidential candidate Harry Brown after having spoken to him at length during an interview.

As an American living in Rome, I joined an overwhelming majority of friends in supporting John Kerry in 2004 and the Democrats in general in the 2006 midterms. But I didn’t vote. Last registered in heavily Democratic New York, I dodged sending in an absentee ballot. To my knowledge my father has never registered to vote or (with exception of the Reagan, The Gipper) ever endorsed any politician by name.

And then there is my mother.

N.B. This is where candidates for 2008 should start paying attention.

My mother has voted in almost every presidential election since she was eligible, and most of the midterm and local elections as well. She turned 17 in 1960, but had she been able she would have voted for John F. Kennedy. When election time rolled around in 1964 and she was of legal age, she naturally voted for his former vice president and incumbent president, Lyndon B. Johnson.

That was the last time she voted for a Democratic presidential candidate.

“My biggest regret,” she drummed into my head as I grew up, “is not voting for [Republican] Barry Goldwater [in 1964]. He had ideas that were ahead of his time. He would have made a great president.”

In part as a reaction to Johnson’s failed presidency — he did not seek re-election in 1968 over the Vietnam War fiasco — she voted for every subsequent Republican presidential candidate except Richard Nixon (“I thought he was sleazy.”), and most of the congressional candidates as well.

Toward the end of Bill Clinton’s presidency, she grew so tired of the hypocrisy and the constant politicizing surrounding his impeachment trial that she began to sympathize with the horny little guy. So much so that her distrust of him slackened. She began to like him, really like him, and the overwhelming majority of Americans agreed. A CNN/USA Today/Gallup poll showed a 65 percent job approval rating as he left office, the highest of any president since they began calculating the statistic approximately 80 years ago. The only person who didn’t like him, apart from his most stubborn right-wing enemies, was Al Gore.

Amid the controversy surrounding the election, something interesting happened in 2000: for the first time since 1972, my mother didn’t vote.

She was disgusted by each candidate and the style of campaigning that had taken over the political process. She found Bush “obnoxious” but Gore couldn’t sway her. “I didn’t like either of them,” she said. “It was a gut reaction.”

Of course, hindsight has revealed the difference between 2000 and 2004 as akin to how you feel when you’re giddy drunk and how it is the next morning, when you’re head-pulsing, gut-wrenching hung-over. In 2000 we were having fun scorning the political elite and toasting third parties — because, really, who cared about the differences between Democrats and Republicans anyway? In four short years we found out. Our collapse as the world’s moral arbiter didn’t consist so much in Venezuelan President Hugo Chavez standing up in front of the General Assembly of the United Nations and calling George W. Bush a “devil,” mocking him on his own soil, but in watching the assembled UN audience stand up and applaud him.

Standing squarely against Bush’s Republican agenda, my mother is vigilantly pro-choice, pro-stem cell, and pro-condom use. She believes in evolution and has a firmly rooted distrust of religious extremism wherever its source. She’s ambivalent about the war in Iraq, but adamant about supporting the troops. She equates the younger Bush’s ineloquence with ignorance, arrogance, and an utter lack of class, the first deadly sin in her eyes. Sometimes when late-night TV host Dave Letterman makes fun of him she calls me and we laugh together.

So in 2004, my mother voted for Senator John Kerry, right?

She didn’t like Kerry, she said. “Why did he have cameras follow him around Vietnam?” she asked. “Mom, there were cameras everywhere,” I explained, “they just show his footage because it’s relevant.” “He was planning to come back and run for office,” she argued. “What’s wrong with that?” I pleaded, already sensing that she is one of the casualties of Karl Rove’s Swift Boat scam. “But mom,” I would shout, “he’s a war hero who was in a prison camp!”

Ultimately, my mother voted for Bush because she held onto a belief in one ideal: “When you’re in a war you show support for your country. You don’t change horses in midstream.” There you have it. Sorry, Kerry.

My mother did. And so by the midterm elections of 2006 my mother did something she hadn’t done since she was 21: She voted Democrat across the board. Bye bye, Rick Santorum. Arrivederci Republican House. Ciao ciao Republican Senate.

The Democrats cheered. There was an overwhelming sense among Democrats and concerned onlookers abroad, in places such as Jordan and Saudi Arabia, where I travel frequently, that America was finally coming to it’s senses. But despite the momentum created by the midterm victory, 2008 is far from being a cakewalk for Democrats. In response to the November elections, the Republican machine has already tacked, shifting its focus back toward the political center. For now, the leading Republicans are Senator John McCain and former New York City Mayor Rudolph Giuliani, both considered national heroes and formidable candidates, along with lesser known Mitt Romney, the Massachusetts governor. McCain and Giuliani in particular have earned bipartisan respect through their frankness, toughness, and unabashed intelligence, not to mention their centrist social values. The Dems in the pole position are Senators Barack Obama and Hillary Clinton, with former North Carolina Senator John Edwards already having declared his candidacy.

So then, who will be the next president?

“I love Barack,” she replies without hesitation as she watches him chat with Oprah on TV. “I’ll vote for him if he’s the Democratic candidate. I just wish his name didn’t sound so much like Osama,” she added, only partly joking.

Granted it’s early, but the most remarkable thing about Obama is that Republicans have yet to attack him successfully. Traditionally Republican voters, like my mother, seem to gravitate toward his soft-spoken ease and self-confidence while Clinton and Edwards both come with heaps of baggage that seem to divide even democrats. “I think [Obama] is genuine, gentile,” she said, choosing her words carefully before making a comparison to Bush that I can’t print here.

Does that mean that the Democrats are a cinch in ‘08?

According to a recent Los Angeles Times/Bloomberg poll, given a choice between McCain and Clinton, half of those surveyed said they would vote for the Arizona Republican, compared with 36 percent for Clinton. Against Romney, the poll indicated Clinton would win by just six percentage points, 42 percent to 36 percent.

My mother reflects these numbers. If the election were held tomorrow and Hillary Clinton were the Democratic candidate, my mother would either vote Republican or not vote at all.

“It’s about the individual now, not the party.”