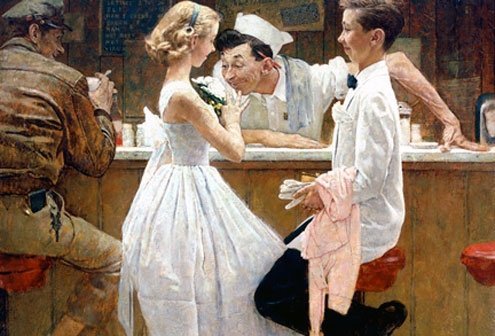 Aspiring to the very face of teenage American wholesomeness.
I

’m visiting my sister Monica and her family in Ashland, Virginia, a small town about 20 minutes outside of Richmond. Only a few years ago, to cross Main Street, one needed only wave an unassuming orange flag to bring traffic to a halt at midday. On Saturdays there’s a local farmers’ market rich with freshly-picked blackberries, strawberry lemonade ($1) and talented young bluegrass musicians pickin’-n-grinnin’ among the squash flowers. On Sundays people go to church.

I’ve been working out at the YMCA almost every day this week, and when I’m through I sometimes let my finger fall across the open bible at the entrance for an inspirational thought or two before grabbing my car keys and heading to Starbucks for an iced coffee. On the way home, almost everyone waves from their SUVs, whether you know them or not. It’s a congenial town in every way. I like it.

At the center of this galaxy of congeniality, positioned like a miniature black hole around which spirals an increasing vortex of matter and anti-matter, is my niece Lucy. At least, that’s the way it appears from my perspective.

My sister grasps the hidden irony of her small town life. Thirty years ago, the two of us grew up in a suburb 20 minutes outside of Baltimore, just one state to the north. We were “Sesame seeds,” a generation much heralded as being the last lucky one before childhood lost its supposed luster. We walked home alone after school with house keys dangling from a string around our necks. We were kids on the loose, like the Lost Boys in the fictional Neverland: without supervision, restrictions, community.

Here in this calm Virginian hamlet in mid-August of the year 2009, no lifestyle could seem more foreign. Children of all ages play together, horse around, eat peanut butter-and-jelly sandwiches, and hate to go to bed on time. Girls watch “Hannah Montana” on television and aspire to be the next Miley Cyrus, the very face of teenage American wholesomeness. They are polite to strangers and say thank you. All of this is engulfed by leafy greenery any city-dweller would envy. You can even see a few bright stars at night from the back porch.

“This is the last American childhood,” Monica said to me on the way home from Ukrops grocery store, where (rumor has it) they let you tote your groceries home if you happen to forget your wallet. “What makes you so sure?” I asked. She then went on to rhapsodize about the merits of small town life: everyone knows everyone else, the streets are safe, there’s a neighborhood watch, it’s a very close-knit community, etc… There are probably hundreds or thousands of similar hamlets strewn symmetrically across the United States, I mused. And every one of them considers itself unique.

When I asked her if she wasn’t afraid of everyone knowing her business, she answered that she actually liked it. It makes her feel secure, she told me. Fair enough. After eight years in New York City and six in Rome, I can appreciate the sentiment. I’ve been navigating a depersonalized environment for so long that it seems perfectly normal. People in cities can be nice, too, but they won’t wave when you pass or let you pay for your bagel the next day. And, according to legend, they might just let you bleed to death in broad daylight. There really is something idyllic about this place that makes me want to pinch myself. Is it for real?

In search of a downside, I may have found one. There is a tangible pressure to conform, for one thing. But that’s true even a proudly nonconformist neighborhood like Williamsburg, Brooklyn — only the standards there are zanier. Instead of three-button shirts and khaki shorts, you’re expected to wear Hawaiian shirts and Panama hats — as long as you “get” them. The cultural gene pool is less varied around here. Of course, this could all be an illusion. But I swear people look at me funny, even in my camouflage hunting cap.

In a few days I’ll penetrate the invisible veil that separates Ashland from the rest of the world and reenter the unexceptional, charmless existence of everyday life. Years from now, Lucy will make a similar voyage out of her protective cocoon and into the menacing world beyond the hedge.

“She’ll lose her innocence,” Monica says with a frown, as if the cellophane armor of “innocence” were the secret glue that binds this community together. For a moment, I feel like I’ve stumbled into Brigadoon. Around here they call it paradise.