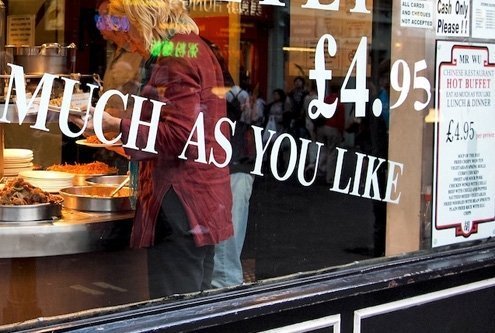 Does the British "Eat as much as you like" really mean the same thing as "All you can eat"?
I

t was a perfect image for people who take artsy photos at odd angles before adding a filter with an inspiring name like “Thoreau Sepia,” and a captioned quote from “The Sun Also Rises.” The fact that I spotted the slogan from a double-decker bus in a hip area of London made it almost too good to be true. On a brick wall towering over a construction site was white lettering peeling off just enough to make it look vintage but not enough to make it illegible. A Chinese restaurant insignia completed the picture. There, on the wall, were the words, “Eat as much as you like.”

I understood the principle, but the words didn’t feel right. The college student in me quickly solved the riddle. In America we say, “All you can eat.”

Now, this may seem like a fairly inconsequential difference. Yet for some reason it stuck with me. Maybe I was reading too much into it, but what if the nagging feeling I had was right? What if the phrasing was indicative of more than how much you could consume at the restaurant?

As an aspiring perfectionist, I demanded an answer.

I started by analyzing the British version: “Eat as much as you like.” I considered it as a polite invitation into the restaurant, a place where you could eat just enough to fill a small saucer, or gorge yourself on Chicken Lo Mein. In that sense the slogan represented a well-moisturized, manicured hand reaching out to you, inviting you in. Here was a friendly and cozy place along the lines of TV’s “Cheers” bar.

I then turned my attention to the American equivalent: “All you can eat.” Just hearing these words set me on edge. Something about them sounds smug, as if you’re being challenged by someone who knows you’ll fail. The slogan isn’t telling you to eat a lot, but rather to eat everything you can. This is a rough hand, extended out to you but ready to yank you in once you take hold of it. The American version makes you feel like there’s a German punk band inside probably playing a song about murder and Margaret Thatcher.

Finally, I realized the key difference lies in the intensity of the two offers. The British one is an enticement; the American one is a challenge. Which is so American. When you take on a task you have to reach for the most advanced level, you can’t just go along for the ride. Why join the local soccer team if you’re not going to be a starter on the number one regional team to impress college coaches who will then recruit you? Why bother coming into the restaurant and eating if you’re not going to eat the most you possibly can? Why waste your time if you’re not going to be the best?

Americans don’t do mild. They don’t do halfway.

In America, you’re not just invited in to eat a frivolous plate of Peking duck. Everything’s a dare. What pressure! You can’t just want the fortunes from the cookies.

That thought made me compile a list of how the British might express some U.S. expressions, acronyms and slogans.