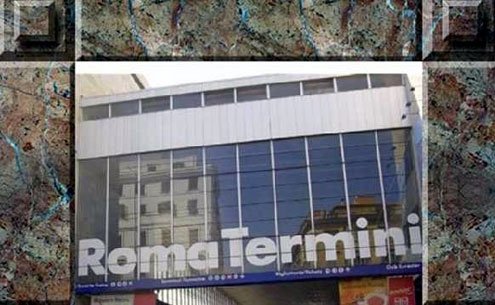 He dropped her off at the Metro station.
A

s usual, she arrived before he did. She ordered a drink. It had been months since they’d seen each other and in the days leading up to their meeting they’d exchanged a number of messages and phone calls. The anticipation was palpable. She knew exactly how his face would light up when he walked in, his head dipped low in shame, a grin pressing against pursed lips. “Sorry,” he would say. She would smile, shake her head, and still love him.

The night before she moved away they’d spent hours in her empty living room discussing everything but their relationship, which was hardly a relationship at all really.

During the six years they’d known one another, neither one had ever taken steps to make it more than a night or two in December, their bodies clenched tightly together under a heavy quilt, or a day at an abandoned beach in July, where no one could see them together or call them a couple.

They talked about how much they liked each other, and drank Limoncello from plastic cups atop a brown packing box, labeled “uncategorized bedroom stuff.” She’d found some mostly-consumed candles and lit them. The light bounced off of their faces while they talked about work, music, food, and family until the Limoncello took effect and their speech slowed and deepened, and their glances stopped skittering around the room. She had watched the candlelight glittering in his eyes and moved closer so that their every next move would feel natural.

Once they found each other’s contours and remembered how to kiss, everything flowed. She remembered the raised edges of scars on his lower back, and how hard it was to grab his wide shoulders in her small hands. He’d had long hair once, and her fingers still went straight to his head, only now she cupped it. The feathery hairs tickled her wrist where they’d once tangled in her bracelet. He’d held her in his lap and her knees bumped against the dusty floors, turning gray and leaving polished tracks.

He didn’t sleep over. They both had places to be. He in an office and she on a plane across the Atlantic.

Now she was in town for a visit.

Since she’d left, they had been writing several times a week. With an ocean between them, somehow they’d grown closer. Maybe it was knowing that nothing would ever happen between them, and as a result being aware they could never make each other unhappy.

Whatever the explanation, their letters opened with exclamation points each time, and always closed with a question. As her visit approached they made deliberate plans to meet, which they’d never done before. When he sent her a text message to say that he would be a little late, she flushed and checked her hair in a compact mirror.

She saw his face through the glass door before he entered the room. She watched him rushing to secure his scooter lock and put away the helmet.

Before he was through the door she rose to great him, her hip bumped against the table and sloshed the wine. They kissed on both cheeks and settled on the same side of the low bench in the bar. She reached to wipe away the spill with a cocktail napkin, but his hand made it there first. He folded the damp napkin and sipped from her glass.

“I’ll have the same,” he called across the room to the bartender. When his drink arrived they clinked glassed and moved closer together, both blushing and struggling to ask and answer questions at a sensible pace so as not to end the evening too early.

They ordered dinner and watched it get cold. Their conversation flowed, beginning with the past few months and then, unexpectedly, took a turn toward the biographical — how they ended up doing what they were doing, why they were who they were, and finally, their parents.

She told of her father’s pay-as-you-can policy at his doctor’s office and watched the awe cloud his eyes, and she felt her own eyes widen when he told her his mother was deaf (she’d never known). Maybe that’s why he loved music so much.

She picked at a tiramisù while telling him about her parent’s divorce and how illness could radically change such splendid people. He touched her hand and said that no matter what, they’d done a wonderful job with her.

This time they were cautious. Delicate. On the couch at first. Later in his bed. When it was over he enclosed her in his arms and stroked her hair. Something in her chest loosened and let in a combination of relief and anxiety that flooded her whole body.

He dropped her off at the Metro station. There was an ocean between them now, but something felt closer.

They kissed goodbye without making plans. As usual.