As Good As Dead 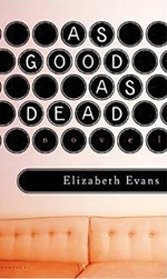 The Iowa Writers Workshop was once something of a literary feather, an important if esoteric pit stop in the career of any number of esteemed American authors. Leave it to heavy doses of MFA chic and pop culture — HBO’s “Girls” is the most recent example — to give the Iowa program mainstream Twitter cred.

Elizabeth Evans, a native Iowan and a workshop graduate, seems aware of this turn of events, and her latest novel, “As Good As Dead,” demonstrates how to quietly mine a trend for literary gold.

The book zeros in on the lives of two women who met as young women when both were Iowa students in 1988 — call them the David Foster Wallace years. At the time, “stylish and slim” Esmé Cole was the star, while adoring Charlotte Price something of an immature acolyte — or so it seems until the plot thickens.

If the 1980s “then” provides an intriguing backdrop (workshop rivalries and secrets), the meat of this story is rooted in the “now,” and that thread is picked up narrator Charlotte from the moment Esmé, now “a stout, red-faced woman” unexpectedly reappears on Charlotte’s Tucson doorstep.

Charlotte wants to call Esmé “my long-lost friend,” but can’t quite do that. Instead, Esmé is the woman “betrayed by me twenty years before.” Introduce the b-word into any story line — particularly one contingent on an ambiguously layered relationship between two women — and a reckoning is in the cards.

Charlotte is now a modestly successful writer in her early 40s, married to art historian Will, the same man she dated while at Iowa. Husband and wife are college teachers and their home near the Sonoran Desert seems bucolic (if nervously childless).

Esmé’s memory-jarring leap into Charlotte’s life acts as an accelerant, lubricating passageways into secrets. Charlotte is a recovering alcoholic whose pleasure at seeing Esmé is sprinkled with doubt, neuroses, and guilt. Never a fan of female friendship until Iowa and Esmé, Charlotte must now pick up loose ends she thought she’d buried by retreating into middle class life. That means remembering to when she was “drunken mess” and a “thoroughly ridiculous person,” and slept with Esmé’s then-boyfriend and later husband Jeremy Fletcher (a “blowhard”).

To some extent, the novel is about how youthful ridiculousness and the resulting betrayal leave imprints that can return as envy and vengefulness. Charlotte’s eloquent, detail-rich recollection is a walk between past and present that eventually brings her to what Esmé wants now. The revival of betrayal means all is fair game, including Charlotte’s relationship with Will and Esmé’s ties to Alabaman Jeremy. The 20-year estrangement is shoved aside to pick at a still-raw scab.

Evans’ prose is riveting, particularly as Charlotte (who wonders if she’s “an egomaniac with an inferiority complex”) and Esmé simmer. “A hole had been blasted in the dam that held the sweet millpond of our life in place,” Charlotte says about the displacing impact of Esmé’s intrusion. Men alone cannot rival what these women share. Evans lays an effective charge, winds the timer, and pays close attention as the seconds tick down.