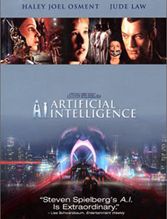 No sense seeking Stanley Kubrick’s moody sensibility here because you won’t find it. Instead, Kubrick stand-in Steven Spielberg (a professional anti-intellectual) makes an accomplished Pinocchio parable, a futuristic Wizard of Oz whose visual delights compensate for jagged edges in plotting and narrative structure. David (Haley Joel Osment) is a toy-boy robot who seeks human love. The Swinton family purchases him as a substitute for his ailing “real” brother who’s in a cryogenic coma. When real-son Martin wakes up and returns as a harpy, toy-boy pays the price and gets the boot.

So begins David’s odyssey through the forests of the future. He finds fellow robot Gigolo Joe (a fey Jude Law) who guides him toward the lost city at the end of the world (the icecaps have melted) where legend has it a Blue Fairy can give him a heart. In his way are an array of fairy tale metaphors (a “Flesh Fair” among them). David’s arrival in partially-submerged New York (“MAN-hattan), though overblown and occasionally silly, is still great sci-fi eye candy. At some point you do feel like telling this kid, “Hey, you can’t go home again…” Too late. Spielberg wraps it up, big surprise, with respectful if undernourished aliens. Osment and Law are delightful. Too long by 20 minutes.