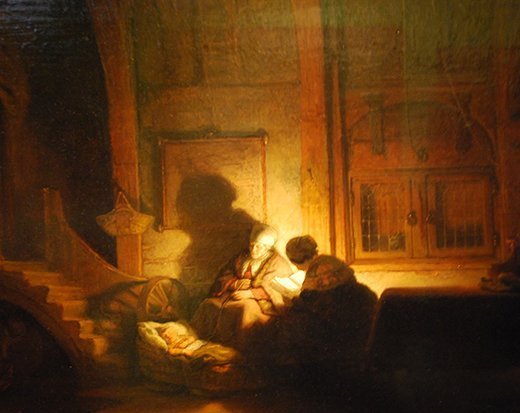 Light at the end of the tunnel, Rembrandt-style.
M

y American bank recently sent me a good-natured message about the many services they offered and the little things they were doing to improve my “premium client experience.” Truth be told, I hadn’t asked for any such improvement, let alone assurances that my money was safe from vagrant hurricanes as well as a wide assortment of security threats. I didn’t even know I was anyone;s premium client.

These days, though, kindness, like law enforcement, can have an intrusive bent. Like it of not you, the client, dwell in the shadow of customer service. Consumer society has evolved considerably from Betty at the Help Desk. Humans are harder to find and titles more arcane.

My bank message came from the “customer enhancement” division, which made it sound like I was an old refrigerator in need of fancy new parts. The pleasant people at enhancement dutifully notified me that I’d soon be hearing from my very own “relationship manager.” This stalwart soul would be in charge of informing my preferences and fulfilling all my needs, at least in banking.

Though a relationship manager and baking sounded to me about as kindred as apples and oranges, I wasn’t one to pick a fight with enhancers.

At the same time, this goofy satchel of verbiage seemed to suit a century in love with effusive labeling, as if to be a banker or a bricklayer failed to meet the middle class standards of the sort of human branding now considered central to professional identity. Why be a banker when you can be a senior investment portfolio planner or an up and coming relationship manager? Why announce you’re a bricklayer when you can instead advertise yourself as a vertical undertaker or a senior height-maker? What’s a doctor if he or she isn’t a medical professional? And who, qualified or otherwise, isn’t a professional of one kind or another?

It’s a bit like language being forced to endure its own twisted form of Affirmative Action — a revised taxonomy of titles introduced offset a history of timidity, if not abuse, Senior Wood Professionals for centuries cruelly referred to only as carpenters (oh, the shame!)

It’s a bit like language being forced to endure its own twisted form of Affirmative Action — a revised taxonomy of titles introduced offset a history of timidity, if not abuse, Senior Wood Professionals for centuries cruelly referred to only as carpenters (oh, the shame!).

To their credit, however, these old terms, doctor, banker, bricklayer, counselor, carpenter, were clear and lacking in pretense. Nor were they limiting. A doctor could be a poet, a banker a painter, a carpenter a violinist, a counselor a mountain climber. “Relationship manager” or “life coach” — the mundane forcibly transformed into an “experience” — leaves little room for the unrehearsed. Unbidden intimacy, an offshoot of social media values, is a centerpiece of all customer service (“Tell us about your hobbies!”).

Forty years agony favorite banker told me in passing that she painted on weekends, loved the Dutch masters, and Rembrandt’s attention to light. We chatted often and vividly, at the branch and on the phone. I needed no enhancements from her, she none from me. She had no interest in improving my “banking experience,” since a bank was just a bank, not a candy shop on Pursuit of Happiness Lane. She did her job, did it well, and was eventually promoted to branch manager.

That title, like others of the period, mattered only insofar as it suggested seniority and intelligently applied confidence. Rembrandt was an aspect of such confidence, deepening ties minus the contrived and incidental intimacy that drives 21st-century exchanges.

We live amid such contrivance, with irony and overstatement as its chums. Hurricanes are deadly thrice over because disaster is the most irresistible of promotions. “Reaching out,” which once described an eleventh-hour lifeline (“I reached out one last time…”) was adopted as a 1980s phone slogan (“Reach out and touch someone…”) before becoming the only way English-speakers know to say they spoke to someone, or tried to. Exclamation points, text-message abbreviations and funny faces do the rest, leaving only Rembrandt — hobbies unknown — illuminated.