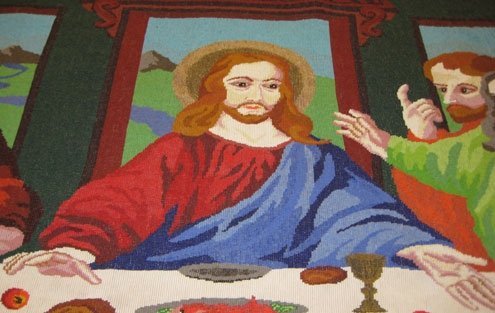 A detail from the bead tapestry.
P

The unlikely subject jarred me. How did a Native American artist come to such an undertaking? Recently, I obtained a transcript of an interview with the artist’s sister from the museum’s archives. It told an extraordinary story.

The Native American artist, Mary High DeGuvaro, was born in 1926, the fifth of 10 children. In youth she suffered from convulsions, obesity, mild retardation and a speech disability. Her brothers called her names; her sisters shunned her. School children bullied and ridiculed her until she feared outdoor playtime, preferring to remain with her teachers, kindly nuns who taught her to pronounce words.

When Mary was 14, the nuns said she was too mature to be in class with young children. Though she was reading at a second grade level, they decided they couldn’t teach her any more.

She cleaned for local businesses until a painful, oozing rash marred her hands. It even kept her from becoming a nun because she couldn’t do a novice’s heavy cleaning. She grew despondent. She had no friends and became a financial burden to her parents.

That’s when her mother extracted three wooden cigar boxes with sliding covers from their dark attic. No one knew they existed. They contained beads.

Mary’s sister, who donated the tapestry in 1993, following Mary’s death, said that both their parents had attended a federally-run boarding schools that operated in the United States from 1890 to 1933 as part of an effort assimilate Native American children into mainstream Christian culture.

Parents who refused to give up their children had them taken away by force. Mary’s father remembered being shipped off to Texas in a boxcar. Children were declared orphans and given new Christian names. They were punished for speaking their own language or referring to their own mythology and customs. By the time Mary’s mother left the Mount Pleasant Indian School, she communicated in halting English and prayed to the Virgin Mary. This is how she raised her children.

Mary’s mother was familiar with the ancient skill of beadwork and began teaching her daughter.

Doing beadwork soothed Mary’s loneliness and gave her self-respect. She would work for hours, wearing rubber gloves against the rash. She made her own patterns by trial and error. Dressed in Indian regalia, she began selling purses, pins and cuffs in her mother’s market stand in Petoskey, Michigan. Eventually, by counting threads and beads, planning designs and calculating sales, she was able to solve complicated math problems, surprising those who knew her.

Mary wanted to make something important and unprecedented, something to sell. She settled on a beadwork version of Leonardo’s frequently-reproduced “Cenacolo.” Mary’s husband, Sylvestor, a kind-hearted man 25 years her senior, built a loom using scraps of wood found in back alleys and old turn-of-the-century C-clamps. He set it up in their kitchen. Mary had special graph paper made and glued the pieces together to make the wall-sized pattern.

Several times Sylvestor drove Mary to New York City to buy huge quantities of beads and miles of nylon thread. Mary’s sister marveled that they found the money, even though they struggled to get by on welfare.

Like a medieval monk copying manuscripts, Mary painstakingly reproduced the Last Supper of Jesus with his disciples, the First Communion, the heart of Christian religion. Weaving her beads — day after day, year after year — became an act of religious devotion. While on a pilgrimage to Rome, a close friend, a priest, told the pope about the Indian woman making a beadwork “Cenacolo.” He returned with a bag of gold beads for Jesus’ halo.

Mary’s sister said the tapestry was inspired by two paintings besides Leonardo’s. The result, though, is Mary’s own. She improvised the room’s furnishings, including a Navaho rug, the distant landscape and, above all, the vibrant colors, especially warm and brilliant greens. Reverence for this color, symbolizing birth and spiritual renewal, was another residue from Mary’s lost Indian culture. It predominates here.

Mary believed her tapestry was inspired by miracle: When she finally finished it, the rash went away. As a result, she refused to sell it, turning down even a $2 million offer by the owner of a broadcasting company. Instead, she and Sylvestor charged a dollar to view it.