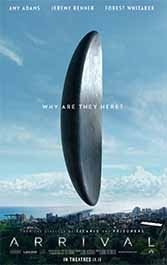 The alien-landing genre has given us some dandies over the years. In Steven Spielberg’s memorable 1977 “Close Encounters of the Third Kind,” new-age visitors communicate through vibrant colors and ethereal sounds. French-Canadian director Denis Villeneuve’s “Arrival” isn’t in that class. It’s suffocated by the two questions all such films present: Why are they here? How do we communicate with them? The answers are important, but it’s the process of getting there that matters. In the case of “Arrival,” that process is anything but compelling, and can sometimes seem silly.

As “Arrival” opens, 12 alien ships —pod-like structures of skyscraper dimensions — have landed at sites all over the world, including Montana, where most of the film is set. Though one would imagine that authorities would assemble large teams of experts to “crack the code” of the aliens’ language (first noise echoes, then smoky shapes), here we have only two, and in the end only one of them matters. There’s Ian (Jeremy Renner), a numbers guy who quickly understands that his approach won’t work, and Louise (Amy Adams), a brilliant, multi-lingual, fetching academic willing to don a hazmat suit to convince the aliens of, well, something. Ian and Louise enter the ship through a dark tunnel with white light at the end. Behind a glass wall are the aliens, tall octopus-like creatures.

They must be smarter than we are because, well, they got here from billions of light years away, which begs the question why they haven’t learned our language(s). Moreover, they seem uninterested in doing so. Instead, Louise must try to learn theirs, presented on the glass as circular Rorschach test-like inkblots that defy understanding. Over several visits, we see a lot of inkblots and Louise somehow develops an iPad dictionary of the language, which unfortunately is flawed and nearly pitches the world into apocalypse.

In the nick of time, Louise makes a breakthrough, one that gives the film a badly needed twist. As it turns out — spoiler alert — the aliens are good guys, and they’ve brought the gift of their non-linear “language,” which allows Louise to see into the future. She learns something she doesn’t want to know, but she also uses her knowledge to bring the nations of the world together and prevent catastrophe. Awesome! There’s some interesting material here: flashbacks that aren’t flashbacks, Einsteinian questions about time, the issue of free will and determinism. There’s a lot to piece together and contemplate after the screen goes dark. But for the most part, “Arrival” is a sadly pedestrian effort, and a flawed one at that.