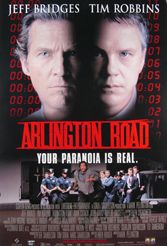 Director Mark Pellington converts potentially hackneyed material into an incendiary film. College professor Michael Faraday (Jeff Bridges) is a suburban widower whose wife dies in a Waco-style FBI operation. An expert on domestic terrorism, Faraday broods over the psychology of militias and their members, elaborating conspiracy theories. When Oliver and Cheryl Lang (Tim Robbins and Joan Cusack) and their two children move in across the street, Faraday accepts the new faces warily. His graduate student girlfriend Brooke (Hope Davis) befriends the couple to calm him down.

Gradually, though, Faraday finds loopholes in the Lang idyll. Is it his intrinsic suspiciousness or he right in thinking that Oliver Lang is a bad guy? Pellington gets strong performances from Bridges, Cusack, and an exceptional one from Robbins, whose kindness is rage on borrowed time. The climax is silly, but see the movie for everything before.