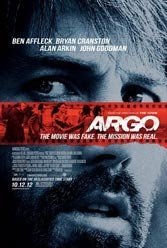 The closing credits of Ben Affleck’s superior thriller include a remark by former President Jimmy Carter: “We upheld the integrity of our country and we did it peacefully.” While historians still argue about the handling of the 444-day Iran Hostage crisis, there was no open conflict, with (slow) diplomacy improbably trumping warfare. This matters because the prudent Affleck hews to the axiom that God is in the details, his film succeeding admirably as a detail-oriented dramatization that generally avoids propaganda surges and mostly resists overstatement.

In December 1979, Iranian militants occupied the U.S. Embassy in Tehran, taking most of the staff hostage. But six embassy staff escaped and found refuge in the home of Canadian ambassador Ken Taylor (Victor Garber). Enter the CIA and low-keyed operative Tony Mendez (Affleck) who concocts an improbable “exfiltration” operation that calls for him to go to Tehran to pretend-scout locations for a sci-fi movie while sneaking the hidden Americans identity papers as film crew members. “This is the best bad idea we have, by far,” says one CIA employee.

To get the hoodwinking done, Mendez (Affleck) teams with CIA Hollywood insiders John Chambers (John Goodman) and Lester Siegel (Alan Arkin), one more colorful than the other. By the time the Carter White House changes its mind, “Canadian” Mendez is already in Tehran and ignores orders to shut down the op.

Start to finish, Affleck controls pace, tension and humor as well offering insight into the absurdities of a bureaucracy plunged into crisis. His Mendez is calm man who speaks little but honestly. One edgy American fugitive calls the whole idea “theater of the absurd,” and he’s right. But Affleck’s cast plays the truth-is-stranger-than-fiction card to perfection.

The Iranian side also gets fair treatment, dodging caricature and moral absolutism (no one on the American side weighs on which evil is greater, that of Ayatollah Khomeini or the deposed Shah, by then cancer-stricken in U.S. exile). Affleck greases the wheels with period-piece music, including Booker T. & the M.G.s, appropriate since they once wrote a song called “Time is Tight,” which is just what this superb effort is: tight.

Some complain the film doesn’t sufficiently credit both the Canadian and British contribution — Ambassador Taylor in the forefront. They really needn’t worry. First, this is embroidered reality at best; second, the story’s integrity is Commonwealth to the core.