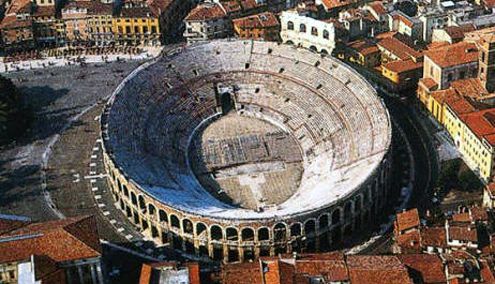 The Arena was built of pink marble with a façade of pink and white limestone from near by Valpolicella.
S

ex, murder, heroism, betrayal, magic, there’s no story that can’t be told musically. My husband, Dan, and I love opera. Whenever our 17-year-old son is out of the house, we pop in a Maria Callas CD and rock out as only fogeys can.

Opera fans who visit Italy will stop in Milan and pay homage to La Scala — as they should. But La Scala isn’t the only place to find opera on a visit to Italy. For an unforgettable experience, there is nothing like Verona’s Arena.

Verona is a lovely city, often missed by visitors in their mad hurry to see Italy (Rome, Florence and Venice). Verona has retained its medieval charm.

The Arena was built in 30 AD on a site that was outside the city walls. Eventually Verona expanded its walls to accommodate the Arena. The first ludii, or entertainments, were gladiator and animal acts and sacrifices to various gods. The name “arena” is Latin for sand because sand was used to soak up the blood in the pit between acts. Plenty of sand was needed for the first four hundred years. People came to Verona from all over Europe to watch spectacles in the Arena. Although Emperor Constantine forbade these blood-soaked entertainments in 325, they continued for nearly a hundred years. Verona was a long way from Rome and the shows were very popular. In the Christian era, the Arena was used for inquisition trials, immediately followed by public hangings.

The Arena was built of pink marble with a façade of pink and white limestone from near by Valpolicella (a name wine-lovers will recognize). It was constructed with four concentric rings connected by arches that permit passage to the interior. Most of the exterior ring fell after an earthquake in 1117. The rubble was then scavenged for other construction. The interior was left undamaged and remains perfectly preserved. Its oval seating area holds 25,000 spectators. Although the Arena is the third largest Roman amphitheater (after Rome’s Colosseum and the amphitheater at Santa Maria Capua Vetera near Naples), it boasts the largest opera stage in the world. This gives the set designer freedom to create environments on a breathtaking scale.

Because of the way it was constructed, the acoustics in the Arena are nearly perfect, even for the cheap seats. Therefore, performances are unmiked, giving singers the opportunity to “belt it out” as they can’t do with a body mike.

Dan and I made the trip to Verona last summer with our friends, Simon and Giovanna. We went to see “La Gioconda” by Ponchielli. As we entered through arches big enough to welcome elephants, I turned to Dan and said, “Imagine! This place was already old before Columbus stumbled onto our shores.” In a deadpan voice he replied, “Welcome to Italy!”

I saw Giovanna ahead of us take a candle from an unmarked box, so I grabbed one, too. Since we had bought tickets in the unreserved section (the original Roman stone seats), we spent the money for cushions. We arrived early and the rest of the unreserved section quickly filled up. Vendors prowled the aisles and announcers came out from time to time, joking with the audience and making the usual announcements (turn off cell phones, no flash photography, etc.).

After a while the sun finally began to set and people all over the Arena lit their candles. It looked like a great bowl of stars. Then the conductor came out and the audience applauded enthusiastically. I didn’t know the story to “La Gioconda.” There is a lot of disguising, secrecy, and betrayal, so the dramatic effect was largely lost on me. Still, the music, singing and orchestration were superb. Plus there was a ballet; “Dance of the Hours,” which was enthralling.

Even if I couldn’t follow the story, one thing was obvious: it takes place in Venice. The set designer had built a canal big enough to accommodate a gondola and three stepped-bridges over the canal. Between acts the bridges were moved together to form one very wide bridge for a change of venue. There was even a full-sized ship’s mast with sails and rigging for the scene at sea.

There was a surprising feeling of intimacy between the audience and performers — even from the nosebleed section. The audience was so pleased by the tenor’s aria that they called for a bis, an encore, which he sung again, immediately and out of character.

As we stood to go I looked up at the immense sky, the night’s music still singing in my head, and grabbed Dan’s hand. I kissed him. “What was that for?” he asked.

“For one of the most wonderful nights of my life.” Giovanna smiled over her shoulder.

Opera tickets are available at the Arena box office on the day of the performance or online from the Arena at: www.arena.it, or through an authorized ticket seller at: tickitaly.com,see verona.com,see cosi.it

There are certain realities to outdoor opera that must be considered in order to maximize your comfort and enjoyment:

Bring a raincoat; you never know. If it rains before the

performance, tickets are refunded. If rain begins after the first note, the show goes on.

If you have unreserved tickets, get there no later than 7:30 p.m. The unreserved section fills up fast. Performances start at about 9:30 p.m., after sunset, and last until after midnight (sometimes long after). This will be especially hard on children, so it might be best to leave young ones with a babysitter.

Because you are likely to be there from 7:30 p.m. until the wee hours of the morning, carefully plan your evening meal. Most Italian restaurants don’t begin serving dinner until 7:30 p.m., and many close kitchens at about midnight. Vendors sell pizza and panini sandwiches in the unreserved section, but you might be happier having a big lunch late in the afternoon and bringing a bag supper.

Palazzo Tribunale (also known as Palazzo del Capitanio): This was a Scaligieri palace with angular tower to which some of the scavenged rubble from the fallen exterior of the Arena is said to have gone. The Scaglieris ruled Verona from the mid-13th to the mid-14th centuries. The Duomo was built in the 12th century on the site of an earlier church. There is an altar piece by Titian depicting the Assumption.

Piazza delle Erbe: The center of town since Roman times, it is now host to a lively permanent outdoor market.

The Roman Theater: Another outdoor amphitheater built in the first century. It has been renovated and is currently used to host Shakespeare festivals.

Castelvecchio: Built in the 14th century to ensure the rule of the nobility, this is a fine example of military architecture of the period.

Casa di Giulietta: Juliet’s 13th century house is at Via Cappello, 27, and the famed balcony is inside the courtyard. The family name was really dal Cappello, though there is no evidence that Shakespeare ever actually visited Verona. Most likely, the Bard took his inspiration from “Historia novellamente ritrovata di due Nobili Amanti” by Luigi da Porto from nearby Vicenza. The small marble balcony is disappointing, surrounded as it is by graffiti-covered walls and crowds. Visitors rub the right breast of the bronze statue of Juliet for luck.