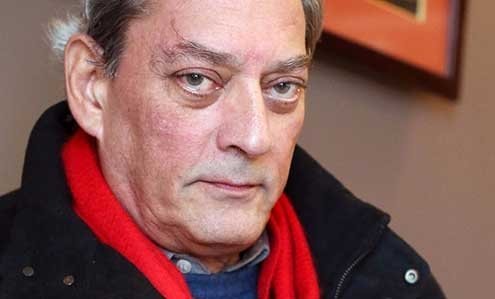 American novelist Paul Auster's "4 3 2 1" is his first novel in seven years.
B

Auster’s protagonist is Newark, New Jersey-born Isaac Archibald Ferguson. But Auster thinks big. He imagines not one but four similar yet different Archies, tracking their simultaneous lives through childhood, adolescence and beyond.

All the Archies are born on the same March day in 1947 to the same parents, Rose and Stanley Ferguson. They all grow up in suburban New Jersey cities that, while just commuter train ride from New York City, seem insurmountably distant from the “real life” in glowing Manhattan, which all four Archies aspire to and will eventually reach.

Slight personality differences between the otherwise identical parents produce a ripple effect of change in each of the boys’ stories, a conceit Auster spells out early: “…while all people were bound together by the common space they shared, their journeys through time were all different, which meant that each person lived in a slightly different world from everyone else.”

Family lives take seemingly infinite twists and turns. Rose eventually remarries, giving Archie a host of step-relatives. Step-cousin Amy Schneiderman becomes the love of several Archies. They share a vivid sex life and with the excitement of kids on a carnival ride debate books they’ve placed on a list of the world’s greatest.

Significantly, though, “4 3 2 1” only introduces three of the boys. Guessing the identity of the invisible fourth Archie is easy since Auster himself was born in Newark in 1947 and the novel contains transparent riffs on his life and times. Not surprisingly, all the Archies work hard at becoming writers. Montclair Archie will become journalist and novelist. Maplewood Archie completes his debut short story collection in his early teens, moves to Paris, translates French poetry, and by age 20 is about to publish his first novel. The third Archie is a keen memoirist, who experiments with fiction. Eager to put suburban New Jersey behind them, they’re both driven and aware of the perils of that drive: “Ambition meant never being satisfied, to be always hungering for something more, constantly pushing forward because no success could ever be big enough to quell the need for new and even bigger successes…”

If this sounds like a complicated and really long novel, you’re right, it is — 866 pages. But don’t worry: Auster’s skillful prose mediates each life tale, pressing the fast-forward button when appropriate.

His Archies and their tribes of friends, cohorts and lovers are resolutely joyous youths. Exhaustively, untiringly, they explore the 1the sexual and social sea changes of the 1960s, a brief era in which everything seemed possible and a perfectly timed period for their collective coming-of age. The 1960så play a critical role in the narrative, just as the decade did for Auster himself. The Archies and their supporting cast will all have some contact with Auster’s alma mater, Columbia University, during the anti-Vietnam student protests there.

Without romanticizing the period, he examines the emotional shocks suffered by an entire generation. Watching televised images of Buddhist monks burning themselves to death during religious unrest in Vietnam, “they understand the quiet days of … boyhood were over.”

Auster builds toward this darker time. Even his upbeat, fast-paced rendering of childhood adventure suggest coming cracks in the bucolic post-war scenario. A vision of staid, white, middle-class life, with its plastered smiles and vacation to a young teen camp called “Paradise,” doesn’t stand the test of scrutiny.

The union between Rose and Stanley Ferguson is hardly perfect. On the one hand, stalwart Rose is a brilliant photographer’s apprentice. On the other, Stanley is to busy with his appliance store business to pay much attention to Rose — or any family reality. He hires his two low-life brothers to work with him, but they set fire to the business hoping to pick up insurance money. Stanley dies. After the funeral, the brothers flee. Leaving Rose to collect the insurance cash. She a photo studio that soon goes upscale. Other Roses in other Archie tales will find greater success as Auster weaves stories within stories within stories.

This carousel of life variations seems at times like the logical completion of Auster’s lifelong obsession with matters of personal identity, which had its genesis in his 1987 “The New York Trilogy.”

The greatest strength of this immensely ambitious novel may be that the various Archie Fergusons never rage against life’s brusque ups and downs. Quite the opposite.

Despite Vietnam’s shock waves and the generational abyss it produces, despite deep grief at the death of friends and family, the men and their tribes bounce back. They live each day to its fullest. They plunge into life, whatever the cost. Here are four life stories that unabashedly celebrate life, memorably so.