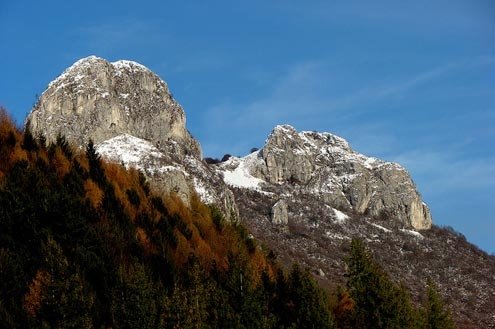 The two most prominent peaks of I Corni di Canzos.
O

n a frosty late December morning, Marino and I stand under the towering Corni di Canzo, birthplace of medieval St. Miro. We’re preparing to hike the Sentiero Geologico Giorgio Achermann, a trail named after a Swiss journalist who recognized the geological complexity and botanical beauty of this part of Lombardy and worked to see it conserved.

The Corni’s two most prominent peaks — corno means horn — are easily recognizable throughout the Lake Como area. We’ve seen them often on our hikes, but never up close. There are actually three “horns,” exposed outcrops of white limestone that reach a height of 1,373-meters in the townships of Canzo, Valbrona and Valmadrera in the Triangolo Lariano, the triangle of land between the two branches of Lake Como.

I Corni are a classic destination for hikers, boulderers and climbers. Many well-marked trails of various levels of difficulty lead under, around, and up to the horns.

It takes us an hour to drive from Milan to Canzo, after which we follow signs for Fonti di Gajum (485-meters) and park in the lot near the Sorgente restaurant. Our plan is to hike the Giorgio Achermann Trail (path number 2) into the Val Ravella valley to Rifugio Terz’Alpe (800-meters), a tourist farm that sits under the western, Canzo horn. Terz’Alpe offers warmth and hearty lunches after a chilly (but easy) 315-meter climb. We’ll walk a ring route back on a quiet road, stopping at Secondo Alpe, the birthplace of St. Miro, and Primo Alpe, a nature center.

At Gajum fountain near the hotel we fill our canteens with mineral water before setting out on path 2 on the right. A sign explains Ice Age glacial movements and the characteristics of local rocks. Trail 2 follows beside the fast-flowing torrent Ravella, which we will cross eight times on bridges.

The first bridges are slippery where previously footprints have hardened into icy bumps overnight. We hang on to the rails. As the bridges get smaller, the walking becomes easier.

After the third bridge, the climb through woods turns slightly steeper. On the right, a path sign points to Parco Massi Erratici, a “park” — literally “park of erratic masses” — composed of Ice Age-era boulders of granite and gneiss from the Valtellina, a large valley north of Lake Como. They are also known as witches’ boulders, since residents couldn’t explain their presence on the lake’s limestone ridges and considered them magical.

Back on path 2, we pass dolomite, conglomerates and marine stumping. We ignore trail 7 to Cornizzolo. The winter light casts dark shadows in thick woods. The torrent roars over rocks to rest in green pools before again descending. We come to a fork — a five-minute sidetrack leads to San Miro, where Miro Peredi, later St. Miro, is said to have made water gush miraculously from rocks. Born nearby in the early 14th-century, he is said to protect rainmakers and water sources.

Still on path 2 to Terz’Alpe, we descend and cross a smaller bridge. The torrent narrows and a sign indicates that we’re in the “Foresta dei Corni di Canzo.” At another bridge, no more than a metal walkway, we pass an aqueduct, more granite boulders, and green serpentine stones. These rolled down from Valmalenco and Masino, side valleys of Valtellina. Marmitte dei giganti looks as if giants sculpted waves and pots from stone.

Next we climb steps and terrain to the Rifugio Terz’Alpe (800-meters), where dogs and donkeys greet us. The sanctuary, once a small hermitage, is a daunting, fairy-tale-like structure with massively thick, dark walls. Its high windows enclose an inner courtyard. Now it’s a tourist-farm owned by the Azienda Regionale delle Foreste (Regional Forestry Conservation) in the pastures under the Corni di Canzo, it welcomes cold hikers with good, hot fare. From here, more paths lead up to the horns.

The horns look better from afar. Up close, they’re rounded, rock domes. Legend suggests that archangels, tired of war with giant devils, decided to end the combat once and for all. Canzio, general of the devils, had a long forked tail and horrible horns. An archangel first stuffed peppercorns under Canzio’s tail and, while Canzio was swearing from the discomfort, blew hellebore powder in his face, causing Canzio to sneeze, so hard in fact that his head hit the mountain and his horns remained stuck. God changed them to stone.

After picnicking and warming up at Terz’Alpe, we descend along the forestry road. There is little traffic, since vehicles require special permits. Away from the rushing water, we revel in the silence and fragrance of fir-tree forests.

Soon we reach Secondo Alpe (795-meters), the birthplace of St. Miro. A small votive chapel stands in his honor. A magnificent linden tree towers above stone huts built over a fast-running stream. The water made temperatures perfect for summer cheese-making.

Further down the road, at Primo Alpe (727-meters), a stone farmhouse complex built around an internal courtyard is now a nature museum and learning center for the Sasso Malascarpa Natural Reserve. Outside, we again fill our canteens at a fountain carved from a granite boulder. From here, a botanical trail leads back to the Sentiero Geologico.

Another path, Lo Spirito del Bosco, is the ongoing creation of sculptor Alessandro Cortinovis. It offers a 30-minute walk from a labyrinth to Terz’Alpe guided by sculptures of wood spirits in an atmosphere reminiscent of the Celtic population that settled here 2,000 years ago.

Our own spirits lead us back to Fonti di Gajum.