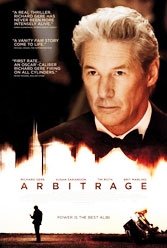 A Wall Street wizard is in deep trouble. There’s an affair, a car crash, and a hasty cover-up. Meanwhile, a deceit-based merger teeters on the brink of collapse. These commingled events put self-styled Wall Street patriarch and philanthropist Robert Miller (Richard Gere), seen by his wife as “regal and wise,” in the clutches of a peril the likes of which even he can’t fully fathom, at least not at first.

That writer-director Nicholas Jarecki’s meticulously executed debut has adult sense and sensibility is evident 15 minutes in. But it’s trump card Gere who takes a fairly conventional story about fairly predictable lies — albeit criminal ones — and lifts it Atlas-like into a stylish whole that develops into a superb parable about a gifted but overly ambitious hedge fund schemer who both likes and hates taking responsibility. Gere’s cunning and memorably ambiguous Robert Miller is probably the most convincing Wall Street character since Michael Douglas’ grinning if caricatured Gordon Gecko spoke Oliver Stone’s “Greed is good” 1980s.

But Miller is a different kind a crook, trapped by a handsome if corrupt legacy he’s worked a lifetime to anchor. He is vulnerably arrogant, cynically hopeful, panicked but cool. Rotating around him Boa Constrictor-like are his wife Ellen (a coldly luminous Susan Sarandon), his chief investment officer and daughter Brooke (Brit Marling), a probing homicide detective (Tim Roth), a protective but spooky lawyer Syd (Stuart Margolin), and a young man named Jimmy (Nate Parker) who owes Miller a favor, or so it seems.

But this is Gere’s movie. While Jarecki tickets family values hypocrisy, he plays a number of more subtle moral caroms, pitting high-stakes cheating against police connivance without appearing to favor either side. Can a man-of-many-faces billionaire get away with lethal infidelity and fraud? Not without compromise, not at least when wife and daughter start pushing on the patriarch.

Yet the real story here isn’t about crime and punishment, or even the wages of greed, but about one man’s midlife navigation, at once vicious and soft, and driven by all he’s ever known to turn to: money.