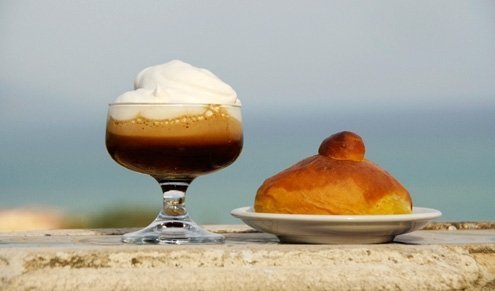 Granita and cremolat arose in Sicily during the time of Arab occupation in the ninth and 10th centuries.
T

he lengthy Arab presence in Sicily had a profound impact on Italian culture. You can see it in architecture, fishing techniques and food. The almond and ricotta-based pastries common to the island represent a direct link to its Arab past. But it’s the pre-eminent “Italian ice,” granita, that has most stood the test of time. The Arab residents of Sicily introduced their iced drink “sherbet” to the island in the ninth century (the Emirate of Sicily lasted nearly two centuries). It was crushed ice flavored with fruit juices and rosewater, voilà sorbet.

A few centuries later came the nevaroli, or snow-harvesters, charged with compacting and storing Mount Etna snow in caves and grottoes. Ice was a luxury item during sizzling summer months and conserving it was essential. Gourmands mixed it with the juice of the island’s citrus to make perfect thirst-quenchers. Nowadays, granita machines are a staple in gelaterias and coffee bars. But these plastic containers chock with churning red or green slush are hardly inviting — and not the real thing.

Confusion often arises between granita and cremolato. Both involve a freezing and scraping procedure to keep the ice in slushy state. But while granita is generally prepared using fruit juices, cremolato comes from the pureed pulp of the fruit. Modern sorbet is the only pure Arab ancestor — finely whipped ice mixed with citrus and sparkling wine or liquor (some cheat and add a bit of egg white to the ice as an emulsifier).

Granita and other ice-inspired refreshments provide ideal relief from a torrid Italian summer. I won’t be in Sicily for another month, but I’m already dreaming of granita smeared in a French style brioche. The best granita I’ve ever tasted was bought for pennies in a little gelateria run by a grumpy woman in Santa Maria la Scala, near Catania. Her pistachio, almond and mulberry granita flavors have forever spoiled me.

While I pine for Sicily, here’s my shortlist of where to score the best granita and cremolato in Rome, and what signature flavors shine in each. Don’t rely on websites (sometimes haphazard). Just go.

Tazza d’Oro Even in the dead of winter, locals flock here for granita di caffè con doppia panna. Cups are filled one third up with unsweetened whipped cream, after which come an icy layer of chilled espresso flakes, topped with one last cloud of whipped cream. Addictive. • Via dei Pastini, 11 (Pantheon). Tel. +39.06. 678.9792.

Sicilianedde This Sicilian deli and bakery churns out many flavorful, high quality granita flavors. But their pièce de resistance is gelsi bianchi (white mulberry). Timing is key, since this wild crop is harvested in a narrow seasonal window (summer). • Viale Parioli, 35 (Parioli). Tel. +39.06.8069.3080.

Gelateria del Teatro All-natural is the core philosophy of this centrally located gelateria that never disappoints. Both branches (one near Piazza Navona and the other on Lungotevere opposite Isola Tiberina) offer delightful granite, made daily. Don’t miss the Amalfi lemon flavor. • Via dei Coronari, 65/66 (Piazza Navona). Tel. +39.06.4547.4880 | Lungotevere dei Vallati, 25, no phone.

La Casa del Cremolato In 1966, legend has it that founder Umberto de Angelis misplaced some strawberries in the freezer, and then forgot about them. Unable to make gelato, he started tinkering, adding sugar and pureeing the berries. The result was cremolato . Mario de Angelis continues his father legacy by offering mouthwatering cups. Order their cantaloupe melon (when in season), with whipped cream, obviously. • Via di Priscilla, 18 (Villa Ada). Tel. +39.06.8620.0724.

Carapina Florentine Simone Bonini keeps things as simple as possible. In season, he makes his strawberry gelato with only fresh berries and water, no added sugar. His fresco carapina (mint leaves steeped in milk) is stunning. And if you’re looking for unusual flavors, pick dark chocolate. Yes, you read correctly — no milk in this chocolaty pleasure, just cacao, sugar and ice. • Via dei Chiavari, 37 (Campo de’ Fiori). Tel. +39. 06.689.3843.

Cafè du Parc This institution is located on one of the city’s busiest intersections and has hosted slurping Romans since the 1970s. The vintage furniture and stellar veranda have not changed. All seasonal flavors are stellar, but the fig cremolato is unbeatable. • Piazza di Porta San Paolo (Testaccio). Tel. +39.06.5743.363.