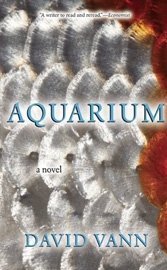 Vann’s page-turner about shaky family glue and the “path to forgiveness” starts promisingly but falters badly, turning more disagreeable than insightful. It’s 1994. Twelve-year-old narrator Caitlin lives in Seattle with young single mother Sheri, a meat-and-potatoes construction worker who guards her past. Caitlin reveres tropical fish. Daily, she trawls the halls of the local aquarium examining the perplexing, often warped beauty of many specimens (the novel includes images). There, in the lull before the story’s storm, she meets a melancholy and regretful old man who joins her in the fish peering.

But it’s not a chance encounter. The man is Caitlin’s estranged grandfather, Sheri’s loathed father, who two decades before abandoned his dying wife, leaving near-penniless, 14-year-old Sheri alone to attend to the lengthy grossness of a death by cancer, playing stripper to pay the rent.

Now, Caitlin has inadvertently shattered Sheri’s estrangement. Raging at her daughter’s fondness for the old man, Sheri — a walking primal scream — hatches a malign plan to mimic the toils of her dying mother. She will play cancer sufferer to show Caitlin what she once endured – how she was made a victim — hoping to sully her daughter’s romantic notions of a newfound grandpa. Once a piece of shit, always a piece shit, says unhinged Sheri. The vulgarity runneth over, as does wanton Sheri.

Once Vonn pushes Caitlin from her dreamy inner world of fish toward sad grandpa, vengeful Sheri (“Rage was what held her together for so long…”), middle-man boyfriend Steve, and Caitlin’s own awkward sexual awakening, the mauling, maudlin details lose their luster (“The were no limits to what could happen in my family…”). This is a predictable rendition of American dysfunction and pseudo-redemption that, minus the suggestive fish, is far too angry and unsubtle for its own or anyone else’s good.