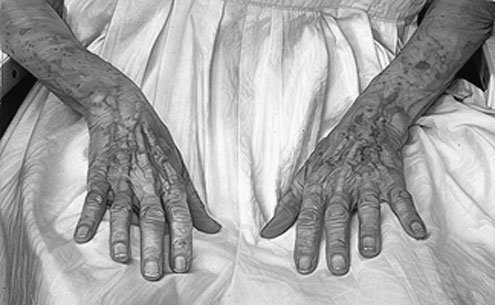 Much that is precious is slipping out of my life.
M

y sister said to me, “We’ve got to teach our daughters to make pie. Nowadays, they buy a ready-made crust and dump in a can of pie filling. Real pie-making is a dying art.”

Our mother made fabulous pies. She’d bake every Saturday for Sunday dinner or for the church potluck. There were dozens of fillings — fresh fruit, nuts, and light meringue-covered creams. She used her mother’s never-fail recipe for flakey crusts.

Mom is dying now. Slowly, one organ at a time idles, then shuts down. With her, much that is precious is slipping out of my life.

She was happiest in her kitchen. There she prepared our food and made our clothes on her treadle sewing machine. As she worked she listened to Chopin on the phonograph or sang along with hymns on the radio. She told us stories about her childhood and stories from Grandma about the “olden days.” Holidays resonated with religious significance and she prepared for them elaborately with devotion and joy. She received our friends with buoyant, uncomplicated pleasure, even dirty-haired hippies I’d be appalled to have my own children bring home.

I feel lucky to have had the luxury of a stay-at-home mom. Mom always felt grateful for having avoided the drudgery of her mother’s life as a Michigan farmwife. As I grow older I appreciate how much she gave to me and how much women like her contributed to the larger community.

Things got more complicated for women of my generation.

Both my sister and I sought affirmation outside the home. I did go through an “earth mother” phase but this amounted to little more than wearing long skirts and beads, even when camping or canoeing. We worried about “balancing” family and work obligations and often felt as frantic and fragmented as circus performers with rings, pins and balls swinging from every limb.

In his book “Pandora’s Poison,” Joe Thornton reported, based on 1970s research, that Herring gulls from the Great Lakes were reproducing at only 10 percent of their normal rate, because of organochlorine contamination in lake water. This was affecting hormone and gene makeup to alter bird behavior: Female birds were not sitting on their nests. Embryos died.

Whenever, after a long workday, I’d feel too exhausted to enjoy my children’s company, I’d remember the gulls. Did they feel unfulfilled sitting on a nest all day? Did they chirp about balancing work and family?

I worried that my children would be like the monkeys in behavioral scientist, Harry Harlow’s experiments. He demonstrated that rhesus monkeys brought up with same-age peers (I thought, “Daycare”) instead of in the context of the parent-child bond, developed near-paralyzing attachment dysfunction.

Although, I felt anxious and guilty about time spent away from family, I nevertheless perceived my mother’s role to be a prison. I disdained the compromises she made to keep her marriage and our family intact. I didn’t appreciate her domestic accomplishments and took her sacrifices for granted. I felt superior to her “giggly-gossipy” housewife culture. I resented pressure to fulfill her ambitions for me.

When, at age 60, with her nest finally emptied, Mom enrolled in the local high school and eventually graduated valedictorian, I was stunned and proud beyond measure.

I named my daughter Francesca for my mother, Frances. She goes by my mother’s nickname, Frankie.

When Frankie was five, she requested a toy ironing board for Christmas. Whenever someone asked what she wanted to be when she grew up, she’d say, “Voglio fare la mamma e basta!”

When she began menstruating, a fifth-grader who played with dolls, she was shocked to learn she’d have a monthly period for most of her life. Somehow, in spite of books, conversations and a child-friendly film about making babies, she hadn’t grasped this essential point. Freud believed girls hated their mothers for making them female. Frankie’s bitter comment was, “I suppose I’ll be getting your knock knees now,” as though everything negative about me would pass to her, with womanhood.

I dreaded the rancor and rebellion that would inevitably come with adolescence. I expected her to resent me the way I’d resented my own mother, my turbulent feelings melting away only when I gave birth to my first child.

It didn’t happen. Frankie is in her twenties now. She’s been my soul mate. She proudly wears the clothes that my mother made for me. The good quality fabrics — wool, cotton, silk velvet — are like new, the skirts, stylishly mini.

Frankie wants to marry her fidanzato and have a house full of children. Without conflict, she assumes she’ll have a career.

She wants to learn how to make apple pie. We use Grandma’s never-fail recipe. She rolls the crust from the center, into a round shape. I tell her, “The more you work it, the tougher it’ll get.” The kitchen fills with the smell of cinnamon and grows warm with oven heat. She starts singing to herself as she slices apples. There’s flour on her shirt. She looks at me and smiles, lovely, like my mother.