Apple of your eye 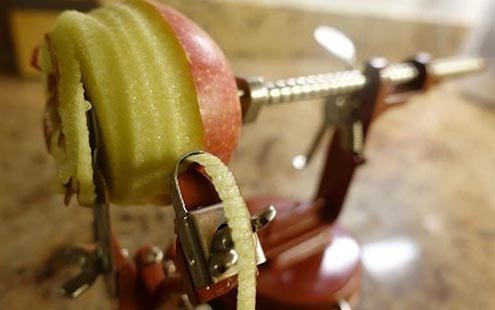 The key to working with an apple is an effective corer.
A

h, the smell of apples baking! Or a flaky and buttery tarte tatin. Or pork chops with caramelized apple slices. Apples are everywhere in autumn. Not only that, but there’s a new variety, the Crimson Crisp, that may end up giving Fuji and Pink Lady a run for their money. In fact, from where I sit in the kitchen, the Crimson Crisp has already knocked the others out of the orchard. Released in 2005, it’s a firm and crispy apple that’s slow to brown and ideal for making juice.

Getting apples that are just off the tree is next to impossible in most cities. Food processing has come between fruits and vegetables and consumers. Fortunately, we divide our time between southern France and Rome. French rural life means access to markets while trips into the Rome countryside lead us to markets teeming with just-picked apples.

Years ago, I read about the origins of the French tarte tatin and was swept away. According to the most popular story, the dessert emerged from the kitchen of the Hotel Tatin, south of Paris, where one day in the 1860s sisters Stéphanie and Caroline Tatin burned the day’s apple pie. Their rescue mission consisted of turning it over, placing a new pastry base atop the apples, and baking it again. It was a glazed hit.

At the time, I was in the thrall of French cooking, so I set about making my own. It made no sense to me that apples cut in eighths would be yield but stewed fruit with a crust cover. So I chose to cut very, very thin slices of Granny Smith’s (there were no Fujis, Galas or Pink Ladies at the time). I used a French apple peeler-corer (you can find them in most kitchen shops), which let me do this in three minutes flat.

Next, I pulled out a tart pan I could easily move from stovetop to oven. Why? To make sure I could apply the crust on the cooked apples while they were still in their caramelized juices.

Store-bought puff pastry is fine and if by chance you have a bakery near you, buy some. Avoid commercial puff paste that which is made with margarine and other oils.

My quick puff pastry recipe not only does the trick but you can make it ahead of time and freeze it.

These rollouts and folds are the basis for mille feuille, tarte tatin and other dishes requiring thin layers of dough. Three folds are usually sufficient.

Before making the tart, take the dough out of the fridge, let it sit for a few minutes and then roll it into to a 1/4-inch thick circle the size of your tart pan.

Now, get to work on the apples.

If the tart gets stuck in the pan, shake it gently from side to side, place on a burner and heat just until it shimmies. Then place it on a serving plate over the tart and invert. Otherwise it’ll stick and make you very unhappy indeed.

Even in France, this recipe is welcomed because the apples are not steamed and made mushy. And when the French accept a change in their own recipe, you know it’s good. Then again, I’ve always been one to upset the apple cart.