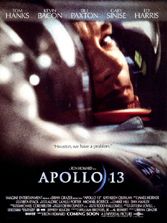 Ron Howard’s best film is honest to a fault. Apollo 13 has the feel of a stylized documentary, colorized and embroidered to hammer home vitally American themes: ingenuity, determination, and laconic wit in the face of doomsday odds.