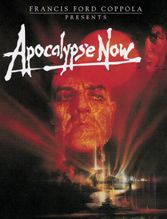 Pitfalls lurk on masterpiece alley and Frances Ford Coppola isn’t immune to them. His Vietnam saga is awkward at times and the 153-minute story ends with heavy-handed whispers. Inadequacies aside, this is a defining work.

Martin Sheen (who suffered a coronary while filming in the Philippines, delaying the movie) is the military ferryman across Vietnam’s version of the River Lethe. He’s assigned upriver into Cambodia to track down renegade Colonel Walter Kurtz (Marlon Brando), a godlike vigilante who’s assembled a depraved and devoted jungle army from smoke, magic, and American military blunders. Coppola’s rock syncopation, including The Doors’ sinuous “The End” at the start, The Stones’ “Satisfaction” headed into Purgatory, and Hendrix played aloud in Hell’s heathen heartland, is more partner than soundtrack.

Throughout, Sheen is an effective poker-faced narrator. His patrol-boat crewmembers are enraged, confused, and visited by hallucinations that would scare William Blake. Each is true-faced (Frederic Forrest and Laurence Fishburne stand out). Robert Duvall’s avenging colonel, whose attack helicopters mix Wagnerian percussion and bombs, thrusts Coppola toward Dante — “Abandon all hope, Ye who enter here.”

In the finale, Coppola’s Kurtz speaks Conrad’s Kurtz: “The horror, the horror.” Though the galvanized Coppola doesn’t make literature, he does make history: This an unrivaled caricature of what war might be like, and how messianic madness fits in.

Napoleonic in scope, it never apologizes for the liberties it takes. Nor should it. It’s the work of a driven and supremely confident artist. A longer version (three-hours-plus) reinstalling an omitted segment was released in 2001, but only waters down the original.