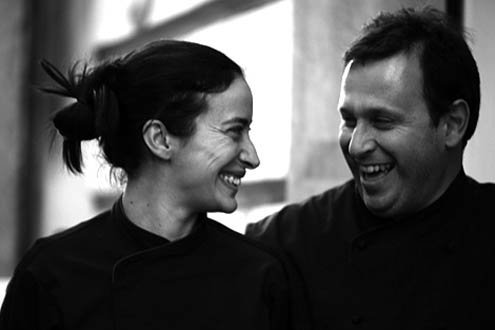 hree demoralizing words — chiuso per ferie (“closed for vacation”) — are an inevitable part of Italy’s August vocabulary. Though the euro crisis is keeping an increasing number of Italians at home — one in three, according to statistics — Rome’s traditional August shudown really hasn’t changed much over the decades. The holidays can slow some aspects of city life to a near standstill, limiting access to unessential services and public facilities.

But my biggest problem is food. I took my vacation in June so I’m here for the month, scavenging for interesting and tasty places that don’t take breaks (the traditional closing period is the middle of the month, so-called ferragosto, a Catholic holiday — Assumption Day — that dates to Roman times, when the Emperor Augustus decreed Feriae Augusti, a mid-year break in his name).

Though Rome has a fair number of August stalwarts, places that have defied closing for years, I’m more inclined to seek out newer members of the August-beating club.

Here’s my shortlist of my favorite open eateries, each one sure to provide some hearty solace from the summer solitude. Some are new or recently opened and some don’t have official websites. I’ve linked them instead to video clips or Facebook pages so you can “taste” them in advance.

Red La Feltrinelli is the newest Rome member of the Feltrinelli bookstore chain, complete with restaurant. Here you can read, shop, and nosh while seated amid prosciutto legs hanging between bookshelves — unless you escape to the garden to get away from fiercely blowing AC. The menu items are scribbled on chalkboard walls beside (often food-related) literary sayings and quotes. Once you sit down, orders are placed via iPad.

You have an interesting array to chose from, including burgers, grilled cockerel in mustard sauce, seafood cooked in airtight mason jars, and huge salads with mango chunks tossed in.

The DIY “Cannolo-fai-da-te” and extensive craft beer menu had me at hello. It’s crowded at lunchtime and aperitivo-o’clock but far quieter in the late afternoon.

Not far from the Coliseum, the Os Club offers a curious experience, at least for Rome. You can sit poolside and devour barbecued food all summer long. The club’s popular restaurant, located in the Colle Oppio, recently expanded its grounds to include the swimming area.

On weekends, it offers Italian pork sausages and skewered mixed meat spiedini grilled all day long poolside (the only pool in the city where swimming caps aren’t mandatory, though tattoos seem to be). The nearby gardens are lush and shady thanks to the huge umbrella pines. The modern wicker loungers, lined with trendy towels, provide a perfect nap spot. Prices are cheaper during the week, but that’s because the grill isn’t in use, robbing you of the poolside fare.

An à la carte menu is always available and Thursday is “show” day, with cooking lessons and poolside music. See website (in English) for details.

Coromandel is a newly opened all-girl bistro located a stone’s throw from popular Piazza Navona. It serves nonstop eats from breakfast to (late) dinner. The breakfast pastries — pain brioches, cookies and croissants — are homemade with French butter and stone milled Piemonte flours. Coffee roasts are carefully selected and the place uses only free-range eggs. Lunch and dinner menus during summer are singularly not à la carte, mostly featuring half-portions and consisting of four-to-five fixed dishes each, all of them reasonably priced. Chef Gaia Giordano has promised a larger tasting menu and a wider selection of items come September, when the new kitchen is up to speed.

No.Au is the talk of the town. Craft beer gurus Teo Musso (Baladin) and Leonardo Di Vincenzo (Birra del Borgo) have teamed up with star baker Gabriele Bonci of Pizzarium and taken over the defunct Société Lutece pub, transforming it into a foodie pleasuredome.

Sure, squid cooked with a clothes iron (yes), and microwaved three-minute bouillabaisse have kicked up some controversy, but at least the place is be open for judgment all summer long. I eagerly await the various bruschettas, in part because I know Bonci’s bread expertise and his emphasis on using only top-notch fillings. There are €5 salads, €9 sandwiches, and a number of gourmet sandwich variations (including steak tartare and Conciato cheese) at a slightly higher price. Drink-wise, you’ll find both “natural” wine and a vintage beer spigot. Giovanni Trimani’s wall art completes the scene.