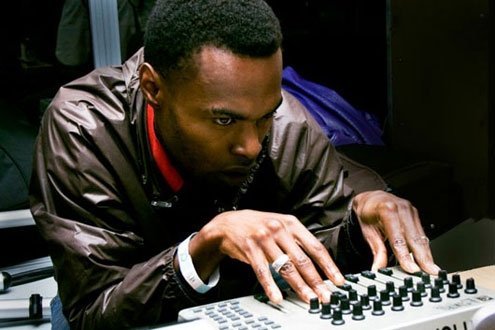 Actress, the man born Darren Cunningham, is fed up with the state of the music industry.
Z

ero satisfaction, no teeth, pseudo artists running rampant. But the path continues…” British techno luminary Actress doesn’t mince words or tone in the press materials for his fourth album, Ghettoville (Ninja Tune). You’re thinking as you read that maybe he’s prepping to double down in an effort to single-handedly rebuke the insipid million-dollar DJs that provide electronic music with its most visible cultural reference points.

Such provocative language requires little imagination to understand: The man born Darren Cunningham is fed up with the state of the music industry and he’s getting out of the game (for now, anyway). Ghettoville is thus elevated from another merely important Actress album to a contentious parting shot, one final blow to the flattened world he worked against. It sounds like all of Cunningham’s cultural weight being lifted from his shoulders and dumped on to the listener. It is, in a word, intense.

It is also enigmatic, though that’s no surprise. Cunningham’s work as Actress has always existed apart from the fads and scenes surrounding him. Whether it was late-decade dubstep that informed (but did not fuel) 2008 debut Hazyville, the UK bass culture at the edges of 2010’s Splazsh, or the submerged ambiguity of 2012’s R.I.P, the Actress sound always exists as a side-step away from whatever’s on trend. It’s its own parallel universe and you listen to it that way, on its own terms.

Ghettoville is no different. As the “bleached-out and black-tinted conclusion of the Actress image,” Ghettoville is a pessimistic and emotionally draining work of art. Some 16 tracks long, Ghettoville unites the three records that came before it sonically while also journeying beyond R.I.P. It is a logical endpoint to follow last year’s Silver Cloud and Grey Over Blue EPs in moving through corroded remains of familiar genres.

“Forgiven” opens the record with a plodding half-time rhythm and what sounds like detuned bass struck with a foreboding decay that sets the tone of the record well. “Street Corp” is a beat wholly devoured by hiss — treble is virtually absent. “Corner” is slightly lighter with its goofy synth melody cruising on the high end of the mix. “Birdcage” and “Image” sound like 80s theme songs recorded straight off the VHS. A lot of these tracks could pass for AFX or Drexciya.

What you notice on repeat plays of Ghettoville is that hip-hop and R&B in particular have a stronger pull in the sound than on any previous full-length. From the Southern “yeah” sample on “Corner” to the invocation of “Don’t” to the blatant lean of “Rap” to “Rule” at the end of the album, it’s these influences that balance out the usual techno and ambient. This marriage of high-minded capital-A Art with sounds from the down-and-out is what part of what makes this record so compelling (not to mention aptly titled).

Once more, then, Actress has made a deceptively emotional work that thrives on pain and discouragement while never coming at those emotions directly. He sets the melody, sullies it, and leaves you to work out the rest.

Now, it seems he’s done the same with his discography. His output may end but the memory of his influence will linger on in microtrends of the weeks, months and years to come. That no one will be able to accurately explain the how or the why of that influence may be his most rewarding gift to music.