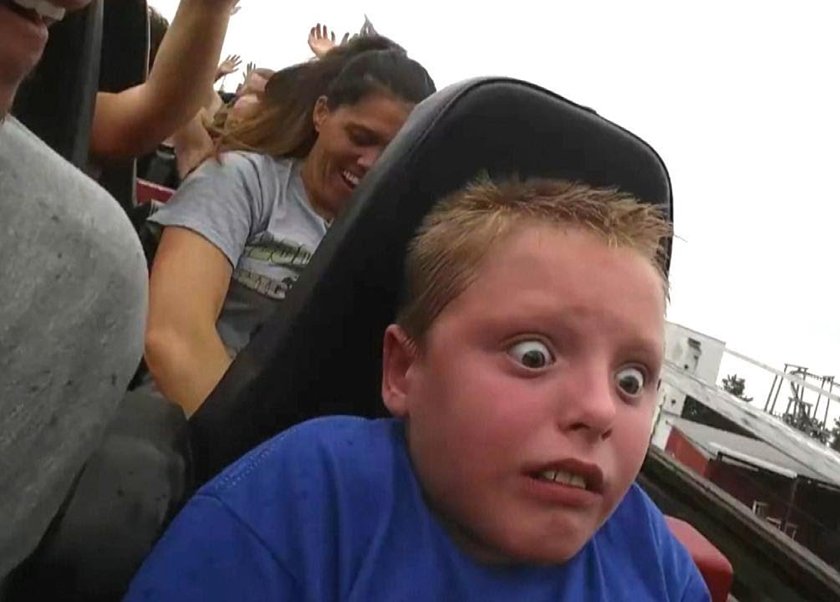 Fun for all boys and girls? Not always...
I

’ve never been a thrill-seeker. I’ve even been called a stick-in-the-mud. As a fourth grader at my school’s annual carnival, they  had to stop the Tilt-A-Whirl for me because it twirled too fast.

At water parks, I would stand at the top of the water slides, peering down, feet planted on the ground.

“Come on, Krissy!” my parents and brother would shout from below. Soon, strangers did the same. Eventually, I would climb down the same little ladder that I’d come up, having apparently missed out on all the fun.

I was in my mid-thirties when I rode a roller coaster for the first time. My younger, thrill-seeking cousin seated next to me giggled as she watched me take in the perpendicular climb to the top. When we dropped down on the other side, I closed my eyes and screamed for the duration of the two-minute ride.

Skiing, which I had done once in junior high, seemed like another thrill-seeking activity to be feared. So, when Julia’s dad David said it was time for Julia to learn to ski, I briefly fretted. She’s only three, but it’s part of his family’s tradition that kids learn to ski at three. As such, we went skiing in Colorado last week.

Julia seems to have both my au contraire nature and my sense of caution, so after we’d suited her up adorably in purple snow pants, ski boots, goggles, and a helmet, she plopped down in the snow and announced that she didn’t want to ski. She just wanted to build a snowman.

“Skiing is a feeling sport,” he explained. “It’s all about being in your body.”

It took some prodding to finally get her down the bunny slope, but once she’d safely gone a few times, she couldn’t get enough. “Again!” she’d shout. I’d scoop her up and carry her to the middle of the slope. While I was perfectly content to just continue to be Julia’s personal chair lift, David suggested that I go skiing too. So I cautiously agreed to a ski lesson with a seasoned instructor, Frank.

When I met Frank at the bottom of the mountain, he pointed to the top and said that we’d have to go up there for the best snow. “So, did David tell you I’m afraid of heights?” I ventured, hesitating at the chair lift. Once the bar came down, I shut my eyes and asked Frank to tell me his life story.

He said that he’d been skiing for sixty years — since Julia’s age. His parents met on the slopes out East. His dad was a World War II veteran, his mother a social worker and Yale professor who worked on President Lyndon Johnson’s Great Society reforms. His parents didn’t give him material things; instead, they believed in giving gifts of experiences, which almost always meant skiing.

I’m not sure how Frank made skiing his profession because he skipped ahead in his story to his current love of teaching, especially veterans on the slopes for the first time. He even teaches blind people how to ski. Hearing that, I opened my eyes. “Skiing is a feeling sport,” he explained. “It’s all about being in your body.”

For the rest of the week, I skied happily, and even opened my eyes for the chair lift.

I was still skeptical until I actually started skiing. I didn’t really remember how to ski — and certainly over-thinking it didn’t help — but my body remembered the basics. And my mind fell in sync with my body once I focused and followed Frank’s instructions.

“Don’t look down! Look ahead, to where you’re going next,” he said. “You don’t have to be aggressive, but be ready for your next turn. Go and get it.”

“You’re gliding over the snow,” he added, meaning: Make the snow work for you, and not the other way around. Hearing this marked a paradigm shift in my thinking — not to fear the snow; to be one with it.

“What if I hit a patch of ice?” I asked fearfully.

“Then bear down and go through it. Don’t fight it, or try to turn away from it,” he said. Frank’s teachings reminded me of those I’d heard in yoga and meditation, and in fact, by the end of the lesson he told me to use yogic breathing to go in and out of turns.

For the rest of the week, I skied happily, with Frank’s mantras going through my mind. I even opened my eyes for the chair lift. Off-slope, I had a breakthrough with a writing assignment and some other eureka moments.

I’ll leave the more advanced skiing to Julia someday, and I still pepper David’s family with fearful questions about collisions, as well as the moguls and double black diamond slopes that are well beyond my reach. But I’m happy to say that I get skiing — which for me has less to do with the thrill of stretching the body than the safety of its return.

About the Author: Kristine Crane