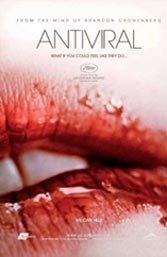 Rarely does an actor’s corrugated looks and androgynous menace convey the mood of a film as persuasively as the chilling Caleb Landry Jones in Brandon Cronenberg’s debut, a Gothic sci-fi thriller that pushes 21st-century celebrity worship to the brink and beyond.

Jones is Syd March, a meek lab technician at Lucas Clinic, which “harvests” and sells celebrity illnesses to adoring fans eager to share intimate star experiences (“Celebrities are not real people,” says the Lucas CEO, “they are group hallucinations.”) Lucas, for example, holds the rights to all of adored celeb Hannah Geist’s ailments. But when the overly zealous Syd infects himself with Hannah’s latest, “just to keep things interesting,” all hell breaks loose, opening the door to a black vortex that includes celebrity “cell steaks” and greedy virus execs made to look like Facebook pioneers plying the dark side of the moon.

Hannah is dying, and so, obviously, is Syd, making him fair game for a host of companies eager to cash in on what killed Hannah, hoping to sell it as part of a shared death high or an afterlife product line. Brandon, David Cronenberg’s son, certainly assembles top-notch terror ingredients — an Ebola-like illness that does blood like Jackson Pollock, celebrity worship gone amok, a sick beauty, and Syd’s Frankenstein-cum-Dracula face. It may be one too many.

Awash in conspiracies, the storyline finally settles on ever-sicker Syd, which the Texas-born Jones plays at one note only. “The afterlife is getting extraordinarily perverse,” says one viral engineer, a bad guy, and based on this narrative, it is. If only Cronenberg’s one-dimensional characters could don the spirit of Jones’ mesmerizing face (often juxtaposed with Sarah Gadon’s Hannah). No luck. The result is a clever, at times terrifying speculation on fandom run amok.