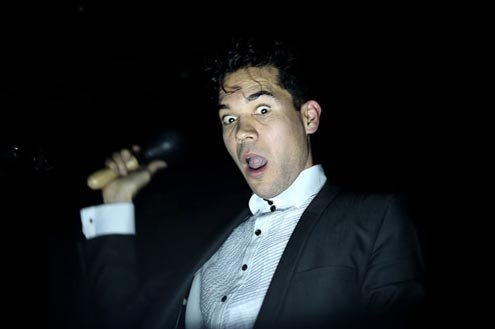 ery few of a year’s most anticipated releases are actually released in January. The month is used instead to build anticipation and speculation on release dates.

One way of doing it is with a teaser EP, and Matthew Dear is among the first out of the gate. His new four-song sampler Headcage (Ghostly International) gives a taste of what his next album Beams might hold.

Dear is a fascinating character. The Detroit native grew from the techno of his hometown on early albums like Leave Luck to Heaven and Backstroke to the increasingly overt avant-pop direction of Asa Breed and, most recently, 2010’s acclaimed Black City.

Headcage continues that path with two of his most naturally melodic productions. The first is the title track. Strange electronic synth plucks the foundation of a song that moves along with Dear’s manipulated baritone and a sort of sliding synthesizer melody. “In the Middle (I Met You There)” is the other standout, vocals surprisingly handed over to The Drum’s Jonny Pierce. His pitch is slightly higher but he doesn’t escape a tinge of echo and digital manipulation as he drives the anthemic song to a noisy, glitchy resolution.

The two other tracks, “Street Song” and “Around the Fountain,” are more subdued. The drums are practically nonexistent and it’s clear Dear is playing around with texture more than songwriting here.

No matter. It’s safe to say Matthew Dear is one of the most successfully chameleonic artists of the past decade, a David Bowie for the millennials. When it comes to anticipation for Beams, it’s hard to build any higher.

There’s anticipation of a very different king brewing for tri-coastal punk band FNU Ronnies ahead of their first full-length Saddle Up (Load). A few months may seem like a lot until you compare it to this band, which has been waiting to make a move for something like three years.

There were the early 7-inch and CD-R releases, almost all of them from 2009. Then, as members moved from Philadelphia to Milwaukee and the West Coast, things were delayed. That this album exists at all is something of a minor miracle.

Weirdo noiseniks like Clockcleaner, Chrome or The Hospitals are a good approximations for the kind of racket FNU Ronnies conjure up on Saddle Up. It’s a mess of piercing guitar scrapes and dizzying vocal assaults.

The best examples are songs like the delirious “Ant People” and the alien boom of “Laptops. Beef V,” but everything here will cause problems for your eardrums. It’s as good as you can get for this strange branch of garage-rock.

Then there’s the anticipation over Odd Future. Last year’s biggest musical provocateurs, the adolescent L.A. hip-hop collective went from Tumblr novelties to festival headliners using the power of blatant misogyny and casual violence. The division between fans and everyone else was wide from the start.

The funny thing was how female DJ Syd tha Kid made the beats that cement the group’s distinctively aggressive sonic template. With fellow producer Matt Martians, she now has a chance to further the group’s momentum in 2012 as half of The Internet on their new album, Purple Naked Ladies (Columbia).

It’s strange to hear how relaxed and distant these 14 songs feel, leaning heavily on late-90s R&B music. The music isn’t all that weird or even polarizing, instead settling into a languid, jazzy neo-soul groove while Syd aimlessly harmonizes or sings so far down in the mix you can barely tell what she’s saying.

There are some highlights, “Cocaine” and “Lincoln” the liveliest of the bunch. For the most part, however, The Internet just winds up sounding like a contemporary of artists like Des’ree or India.Arie from more than a decade ago: good when the mood is right at best, boringly forgettable at worst.

The album is an interesting detour and far from a footnote, but her solo productions for Odd Future always sound more focused than this. The spark of innovation is surely still there. But the enthusiasm is tempered, at least for now.