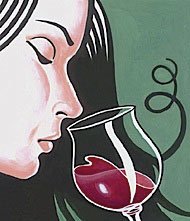 t’s been a difficult month. First came the scary middle-of-the-night call from my 18-year-old son who is brazenly facing Round One of adult growing pains. That was followed by an icy dose of reality from a close friend who may be up against a second brain aneurysm, reminding us both that life and deep friendships come with a shelf life called mortality. This new anxiety came on the heels of a not-yet-healed midlife crush on a much younger, broody, dark-eyed Sicilian.

So how did I console myself? First, I tried to rationalize it as a temporal experience. Then, like any self-respecting wine oenophile in the clutches of sadness, I cracked open a bottle to soothe my melancholy, or at least come to terms with it.

I had a wine columns to write, yes? And a frantic editor who was probably wondering where in Hades his writer had gone. What better way to avoid reality and remain productive than to use this column as an excuse to draw solace from the vine. After all, I was drinking in fulfillment of my journalistic duties.

But unlike Miles, the equally depressed but admirably funny main character in the movie “Sideways,” who toasts his blues with $400 Cheval Blanc in a Styrofoam cup, I’m on a budget. The expensive stuff I save for happy moments: the birth of a child, a promotion, or an enchanting evening with good food. For solitary moments, I seek wines in the under-€8 range, which Italy has in abundance.

Did I tame my angst? No, not really, but I do have some good suggestions for those feeling a bit blue but not living on a Midas budget. Some advice, though: Open one of these jewels with friends, cry a little, laugh a little, and remember to breathe.

Made from Sangiovese, Merlot and Cabernet Savignon this wine is strong and intense, as well as very dry and full bodied. Aged for 10 months in steel tanks followed by 18 months in the bottle, it has blackberry highlights and is good with red meats or strong cheeses. Umbria. €7.80.

One of South Tyrols most famous light wines, this one is aged only briefly in oak casks so the taste of the grape shines through. Perfect for an evening of girl talk or crying on a friends shoulder. Alto Adige. €7.80.

A lighter yet spicy drinking red made from 100 percent Barbera d’Asti. The wine is vinified in steel tanks then aged in French oak for six to eight months. Nice fruity bouquet with a long balanced finish. Piemonte. €8

If you haven’t tried a Vermentino, put this one on your list. A light straw colored wine that’s elegant for fish dishes. Its taste is tart and blossomy with crisp apple and almond highlights. Liguria. €7.60.

A relatively young vineyard only producing its own wines since 2003, this Sangiovese clone shows promise and fits most people’s budget. Emilia Romagna. €7.10.

One of Tuscany’s oldest wines, that some even suggest was first introduced by the Etruscans. This small producer bottles a lively version that I often use as a starter splash for my porcini risotto, downing a few sips every now and then while I conduct my own private Italian cooking therapy while listening to Billie Holiday. Toscana. €5.50.