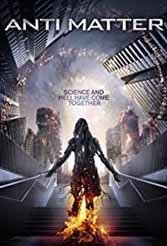 Ana Burrows (Puerto Rican actress Yaiza Figueroa) is a Hispanic-American chemist working on PhD experiments at Oxford University when she stumbles on an aberration her British colleagues Nate and Liv think can be engineered to teleport humans through the time-space continuum, aka a worm hole. Riches loom. “We’re going to change the world,” says Liv. The troika works secretly (a cat makes the trip), but the university gets wind, as do animal rights activists, forcing a speedup. Ana becomes the first human test subject. In she goes and out she’s beamed, and so it begins.

British writer-director Keir Burrows’ clever but never-quite-thrilling film hinges on a single conceit: can body be divided from soul, literally disembodied, and if so how does exactly does such a “soul” behave in so-called real life? Post-experiment Anna is dazed, confused, suffers from insomnia, memory loss, paranoia, eventually suspecting her cohorts have tinkered with her essence. But which essence would that be? The Ana that stepped into the beam vacuum or the Anna that emerged.

The answer is intriguing, yes, but it doesn’t make up for an hour-long midsection stuck on Ana’s jagged bearings.

This is a story Burrows’ fellow Englishman Charlie Brooker might have made into a fine hour-long episode of his acclaimed “Black Mirror” series. It begs a number of smart questions but lacks the substance (and screenplay) needed to give them a quantum of wonder. So, does the soul have weight? Apparently it does, but never for long.