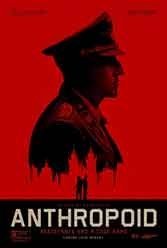 British director Sean Ellis chooses wisely in compiling a fictional dramatization of the rarely touched on 1942 assassination of Czechoslovakia’s ruthless Nazi governor Reinhard Heydrich. Two Czech partisans parachuted in from England as part of a larger joint effort between the London-based Czech government-in-exile and British intelligence led the brazen plot, codenamed Operation Anthropoid. To this day, it remains among the war’s most daring and costly exploits.

Unfortunately, Ellis never quite masters the dance steps of the whole, unable to glue together run-up and climax. He zeros in on lead plotters Jozef Gabčík (Cillian Murphy) and Jan Kubis (Jamie Dornan) as they land in the woods outside Prague in late 1941, make contact with the resistance and later meet up with the rest of their team. This early going is often slow and repetitive, weighed down by “there’s nothing romantic about war” platitudes, stilted romantic subplots, and one too many cigarette lighting scenes by the visually charismatic Murphy. All fear of ferocious reprisals if Heydrich is killed. All are right.

Gradually, though, it becomes clear that Ellis is using prelude not so much to “arrange” the assassination (which succeeds almost by chance), but to set up the circumstances of the lengthy firefight between Nazi troops and the betrayed Czech plotters, who find themselves backed up in Prague’s Karel Boromejsky Church.

That astonishing faceoff, which pitted some 750 SS troops against a handful of lightly armed men, lasted for hours and is reproduced here with credible and gut-wrenching cinematic intensity.

But the steps leading to this heroic if ill-fated confrontation are choppy enough to make one wonder what could have been had Ellis chosen to scale back some early sections, perhaps adding some backstory, or even including the Nazi vantage point.

Reservations aside, his film is a valuable piece of historical fiction about a forgotten World War II operation in a country under an unspeakably brutal occupation. It is also about a band of patriots determined to stand up for their country whatever the cost. And it was high. Two villages were razed and an estimated 5,000 people killed in reprisals that lasted months if not years after the fact.