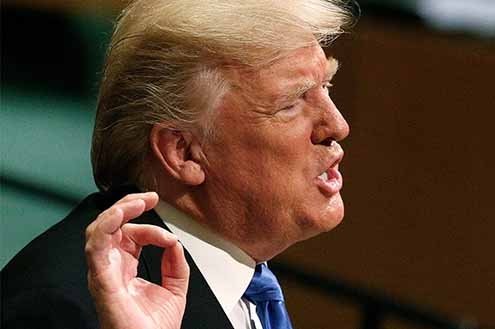 At the United Nations, Donald Trump sounded an American military drumbeat.
I

These attempts to use each move by the administration to “explain” the president’s thinking help illustrate the era’s recurring question: who is Trump? The president’s off-the-cuff style coupled with his flexible beliefs, most clearly in evidence during a three-day campaign stretch in which he took five different positions on abortion, has sent observers scrambling for a mental model to frame Trump’s actions. Some emphasize the president’s transactional need for “wins.” Others highlight Trump’s history of racist statements to suggest that intolerance is the unifying feature of his career. Others more simply suggest that Trump wants to undo President Barack Obama’s legacy.

In foreign policy, however, Trump is a Republican. Nowhere is this clearer than in his approach toward the Joint Comprehensive Plan of Action (JCPOA), also known as the Iran nuclear deal.

During the first months of his administration, Trump seemed poised to keep the agreement. Implemented in 2016, the deal negotiated with Iran by the Obama administration — along with foreign partners — traded the lifting of economic sanctions on Tehran for the curtailing of the Iranian nuclear enrichment program.

Because of hawkish anti-Iran legislation from the U.S. Congress, compliance with the deal requires regular action by the executive branch. Every few months, the president must certify Iranian compliance with the deal and waive the application of U.S. sanctions in order to uphold its end of the deal. For the first few months, even while decrying Iranian activities, Trump did just that. Now, faced with a looming mid-October deadline, the president seems unlikely to re-certify Iranian compliance.

Trump’s embrace of mainstream Republican thinking on the Iran deal stems in part from the general Republican consensus on Iran policy. On topics like immigration, the more staid establishment conservative view of the Wall Street Journal may differ from the nativist rhetoric of Breitbart, leading to the president’s see-sawing based on differing input from advisors. This chasm does not exist on Iran. Therefore, Trump’s embrace of Fox News’ lowbrow approach toward the Iran deal mirrors the highbrow hawkish Washington think tank approach. In both outlooks, Obama conceded too much upfront — he lifted sanctions and allowed foreign investment — for too little in return. Iran could continue its missile tests and its destabilizing activities in the region while only having to halt its nuclear enrichment program.

Even the talking points between the two schools are similar. While Trump may say unfreezing Iranian assets blocked by the U.S. and its partners resulted in a $150 billion give-away to the Tehran regime, a hawkish D.C. think tank has argued that the number is closer to $100 billion. Neither number is right. While under the sanctions Iran, could not repatriate money it was paid for its products. China, for example, would buy oil from Iran and deposit money in an escrow account. After the deal, Iran repatriated this cash (though it used most of it to pay old debts).

The entire premise of Iran’s upfront benefits — a premise that Trump and hawkish Republicans share — is flawed. Critics of the deal get the chain of events backwards. Iran gave up its quest for a nuclear weapon up front. All it received in return was the promise that investment would — over time — return to Iran, a country badly in need of capital after years of crippling isolation.

But even though Iran has complied with its side of the agreement, foreign investment has been slow to accrue. Trade with the European Union in 2016, for example, remained half of what it was in 2008.

Yet Trump remains closely tied to Republican dogma on the deal, suggesting an allegiance to Republican principles rarely highlighted by commentators eager to find the “real” President.

Interpreting Trump is an appealing pastime because he appears so inscrutable compared to his predecessors. Obama was famously deliberative. He spoke to The Atlantic magazine for hours to explain his foreign policy views, resulting in a nearly 20,000-word profile. George W. Bush, while less contemplative, telegraphed his beliefs. He was “the decider,” a leader with a Manichean view of the world (just think of “axis of evil”). While Trump’s persona may not be as clearly delineated, many of his views are quite simple and predictable.

A trope regarding standardized tests is that all questions will be of “easy” or “medium” difficulty. For this reason, the obvious answer is usually the correct one. Many guides to such tests suggest spending too much time on a problem will increase the likelihood of choosing a too-clever-by-half answer.