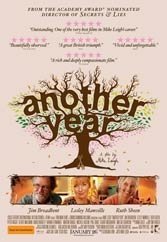 Mike Leigh may be the most humane filmmaker of his time. Here, he examines a year in the life of a happily-married East London couple using seasons as chapter headings. It begins in spring, when we’re introduced to Gerri (Ruth Sheen) and Tom (Jim Broadbent), she a counselor, he a geological engineer. Longtime sweethearts, they’ve been together for decades, sharing meals (he cooks), a vegetable garden, a bed, laughter, and the love of their unpretentious 30-year-old son Joe (Oliver Maltman). Tom and Gerri represent a kind of marital and emotional stability oblivious to casual downturns. As a foil to this solidness, Leigh introduces Mary (Lesley Manville), a chatterbox who is also Gerri’s office friend. She’s lonely (her husband left her), a lush, and romantically interested in Joe, whom she’s known since childhood. If Tom and Gerri offer inclusive compassion that honorably accepts the passage of time, the needy and envious Mary stirs up the opposite

Summer brings Ken (Peter Wight), Tom’s longtime friend, overweight, burdened by alcohol and the regrets of age (“Young people, young people, everything for the young…”). Winter entertains the woes of Tom’s laconic brother Ronnie. These comings and goings, like the incidental squeaking of an extended family wheel, shape a moody urban pastoral whose only real cliffhanger is Mary.

Leigh has long been oblivious to modern intrusions (not a mobile phone appears in the film). His sole interest is the why and how of people, these parcels of flesh and bone trying to make the best of real life, which is ultimately mundane, its heroism minor. Redemption is not on tap. There are no second chances or sweeping gestures. Nor is there judgment.

While Mary is at once draining, exhausting, and devastating display — Manville is dazzling — it is the ties binding Gerri to Tom that anchor yet another of Leigh’s small masterpieces, as hopeful as it is sad.