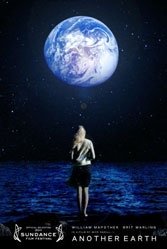 Astute science fiction takes mundane events and subverts them just enough that normal light refracts against the grain. The prism’s primary colors remain intact but they give off a strange glow. Credit co-writer and actress Brit Marling and lead writer and cinematographer Mike Cahill with near-perfect subversion in this visually and aurally suggestive film that is at once a story of remorse, repair, and, of course, fantastic refraction.

Rhoda Williams (Marling) is stargazing MIT student is amazed to hear about the discovery of a duplicate earth while driving home from a party. Distracted, she crashes head-on into the car of Yale composer and music professor John Burroughs (Mapother), killing his pregnant wife and young child. Released from prison four years later and humbled into a kind of Nordic shame (she works as a janitor), Rhoda anonymously approaches the still-devastated Burroughs in an effort to apologize. Instead, she becomes his housecleaner.

Rhoda’s effort to “fix” her past has as a background global scientific efforts to make contact with “Earth 2,” a gambit that opens its own realm of narrative possibilities, including Rhoda’s entry into a contest for a commercial passenger to the mystery planet. An outcast in her own life, Rhoda seeks an escape hatch, which is also what grieving John wants. The result is a different kind of crash, this one between two beaten down and scarred souls looking to the cosmos for help.

Marling’s deer-in-the-headlights Rhoda — introduced as a teenager saying “I don’t want to eat the apple of cynicism…” — carries much of the action on her shoulders, with Mapother providing able assistance, including a stunning sequence in which he plays the musical saw. Within the folds of the story, with its punctuation-style piano and cello lines, are poignant ruminations about identity, second chances and limits beyond which not even tenderness can reach.

Faced with inevitable comparison with similarly-themed but grander works, including Lars von Trier’s same-year “Melancholia,” Cahill’s film asserts its own dimension. Like a deeply felt first novel, it is a fable both whole and at peace — from start to stunning end.