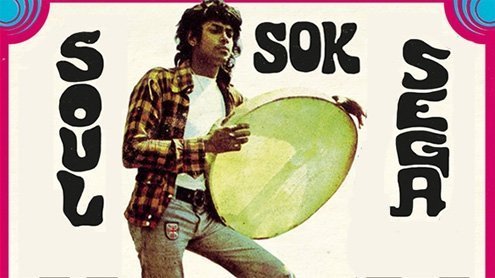 frican music compilations popular in the West often tend to focus on specific times and places. Musical collections from Nigeria, Ghana, Benin, and Senegal recorded between the late 1950s and late 1970s, while by no means ubiquitous, are easy enough to find.

The geographic, linguistic and political reasons for this come behind purely commercial ones: trusted labels such as Analog Africa and Soundway tend to plumb the crates of nations whose music already has established audiences.

This brings me to two recent compilations that alter the balance in different ways.

The island’s music, Séga, has its roots in displaced slave traditionals. Séga relies on the “ravanne” drum, an instrument made from goatskin strung over a circular wooden frame, with the “maravanne” (a box of dried sugar cane flower shoots and filled with dried seeds) and triangle as frequent accompaniment. A Latin 6/8 tempo is standard.

Though the music was long reviled by the Roman Catholic Church because of its Creole roots (Mauritius is nearly 40 percent Catholic), public acceptance grew in the 1960s, allowing for greater exposure and development.

The fruits of that development are on full display throughout Soul Sok Séga, whose material was recorded between 1973 and 1979. Compiled by La Réunion-based DJ duo La Basse Tropicale (Natty Hô and Konsöle), the funk component is strong. Ti L’Afrique’s “Soul Rock Séga” kicks it off, followed by Claudio’s “Bhai Aboo,” a fast-moving, psychedelic shuffle with reverb on the vocals. Ramone’s “Nouveau Venu Dans L’Endroit” brings the ravanne to the fore. Catherine Velienne’s “Mo Mari Fini Allé” is especially noticeable (and welcome) for its female lead.

Most noticeable aside from the superb sound quality is how freewheeling it all sounds. Despite its turbulent origins — séga’s was seen as the region’s “blues” — the artists on Soul Sok Séga are loose and relaxed.

The second compilation of interest is Gqom Oh! The Sound of Durban Vol. 1 (Gqom Oh!), which represents an all-too-infrequent glimpse into current musical events on the continent, specifically South Africa.

Some readers may be familiar with the sounds of Die Antwoord, Spoek Mathambo and the buzz surrounding Shangaan electro a few years back. They may also know acclaimed DJ Black Coffee. Though all products of South Africa, they’re a generation clear of township life.

Durban-based Lerato Phiri and Nan Kolè, in Rome, are eager to showcase what this generation is up to. Gqom (pronounced “gome”) is a Zulu word for “drum” or “hit” and, as its style suggests, the emphasis here is on percussion. Associated with a dance known as the bhenga, gqom retains the Shangaan synths that anchor township dance music while also drawing on hip-hop, instrumental grime and bass music. Not surprising, a lot of this material is available in the wilderness of Internet backwaters, particularly the Kasimp3 filesharing site.

Phiri and Kolè’s compilation defines the sound by throwing you in the deep end. The 12 songs (with four bonus digital cuts) suffer nothing for length — most easily eclipse five minutes — and don’t evolve much, preferring simple melodies and a sinister low-end edge. The underlying thump of a kick drum doesn’t exactly make this ankle-breaking footwork, but its off-kilter rhythms are a triumph of broken beats.

Each song is an exercise in unremitting minimalism. This music exists to get bodies moving. Limited technique aside, nothing can disguise gqom’s nervous energy. Gqom Oh! is a valuable peek into the sound of Durban’s youth. Labels would do well to feature more like it.