Anonyma: Eine Frau in Berlin (A Woman in Berlin) 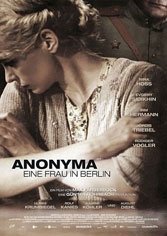 How do you make a film about rape? Tough. How about mass rape? Even tougher. Yet German director Max Färberbök approaches the subject with great deftness. His raw but tender “A Woman in Berlin” reconstructs the anonymous diary of a journalist who lived through the the 1945 Battle of Berlin, which eventually saw the advancing Soviet Red Army occupy the city. The diary’s contents so upset West Germans that the book was banned soon after its 1954 publishing.

Protagonist (played Nina Hoss) and her fellow residents are holed up in the basement of an apartment building when Red Army troops begin looting and raping at will, exacting revenge on the fallen Nazi regime. After the Hoss character is raped repeatedly, she realizes she must find a “protector.” He is a Soviet major whose rank and culture bring some relief — and food — and a glimmer of emotional healing, until he too is swallowed by the violence.

The protagonist and the other women make their own arrangements with the conquerors, struggling to understand how it all came to pass. Tales of German barbarism during the Nazi invasion of Soviet Russia fracture self-righteous illusions about Russian savagery. Färberbök’s vision of events is emotionally complete and beautiful. There’s Dionysian joy, domestic tenderness, and raw violence. The diary was finally credited to Marta Hillers in 2003. A Berlin journalist who was in the city when it fell, she died in 2001.