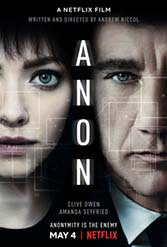 In Andrew Niccol’s retro-future New York, the citizenry depends on visual implants for memories, guidance and basic cognitive intelligence. Everyone has an eyesight-driven record all can access, including police. It’s Big Brother for the self-absorbed digital age, one that frets about its privacy while unable to resist the urge to go public about the private every chance it gets.

Enter “Anon,” her apt user name (Amanda Seyfried), a self-styled mind hacker for hire. A futuristic “fixer,” she’ll erase that meeting you had with a crime lord or hooker so that nosey cops or girlfriends are none the wiser. She’s also apparently murdering her clients.

What Niccol wants to sell as a high-minded peek into the anti-private future is really a noir B-movie with “Matrix” trappings. Cop Sal (Clive Owen) is tasked with tracking down the hacker-killer but soon finds himself haunted by his own stored demons, including guilt over the death of his 10-year-old son. The high-minded soon turns hackneyed because neither expressionless Owen nor bored Seyfried have much a script to work from. Cops are saddled with lines like, “Anonymity is the enemy” and “We have to believe our eyes or the system doesn’t work.” Owen, wooden throughout, gets the likes of, “I can’t believe my eyes is not an expression.” Seyfried’s bad-girl “fixer,” who’s managed to erase herself from Big Brother’s all-seeing hard drive, swears by “DFE — delete fucking everything.”

This stilted verbal foreplay undercuts whatever original thinking veteran New Zealander Niccol might have brought to bear, too bad since early films like “Gattaca” (1997) which he directed, and “The Truman Show” (1998), which he wrote, showed sci-fi acumen that later films (including 2001’s “In Time”) never matched. Aside from its flood of digital antics, everything about Netflix-made “Anon” is stiff and predictable, risky territory for a film that styles itself as a thriller. Those attracted to cyberspace speculation should skip this in favor of Charlie Booker’s Netflix series “Broken Mirror,” whose multilayered insights leave Niccol rowing in analogue.