Annoying at any age 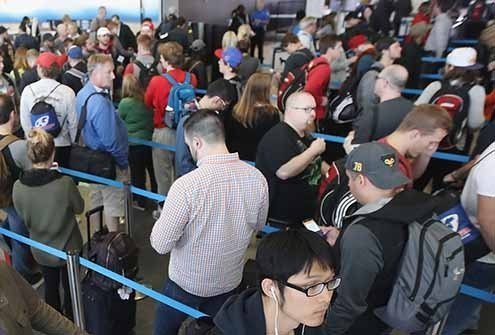 Who wouldn't be bored, at any age?
I

was in a Rome airport check-in line a few weeks ago with my daughter and her family as they prepared to go home after the holidays. In front of us stood a family, a mother, father and little girl, probably no older than two. The mother was pushing a huge trolley with all sorts of luggage and assorted objects. She looked to me sad and tired. The grouchy-looking husband walked back to where the little girl was pacing around near her mother in the endless line. This apparently annoyed the husband. He moved the girl to behind the trolley and said firmly, “You stay there, and don’t move, and don’t touch anything!”

I wasn’t sure what it was she could have touched, since aside from the mother’s scarf, a couple of coats and her own doll, there were only suitcases and bags — hard enough even for an adult to move.

The eternal wait at tiny Ciampino airport continued, with the curving line moving forward at a snail’s pace. I was bored, and so was everyone else. My two grandchildren were playing, pulling suitcases of their own, roaming off and coming back.

As for the little girl, her mother occasionally picked her up. Strangely, I thought, she didn’t rest her on the handle of the trolley, where she could have just held her for balance. It would have been a lot easier on the mother since she had to push the trolley alone. Instead, she held her in her arm. Her husband stood a bit ahead not doing much of anything.

The little girl was clearly getting tired and tried pulling at the scarf, on top of which was her doll – for whatever reason, far out of her reach. When her mother saw what was happening, she gave the daughter the doll and rearranged the rest. At a loss as to what to do and clearly exhausted, the little girl started whimpering.

As soon as he heard this, the bullying father came back and angrily said, “Why are you crying? What do you have to cry about anyway? Be quiet!”

That was it for me. I admit I’m not one to mind my own business. In these cases, especially when kids are involved, I respond.

Very much out loud, but to no one in particular. I said: “What does she have to cry about? She’s bored and tired like everyone else in this line and is just a little kid! What’s your problem instead? What do you have to be a bully about?”

This last part I said toward the bully-dad while giving a sympathetic look to the long-suffering mum.

I fully expected a “mind your own business” reply, which is what I often get in these situations, and was already preparing my retort, but instead what followed was a small miracle.

The father stopped yelling, the mother picked up the girl to comfort her, and she was not bullied for the remaining 20 minutes of the wait.

I know how tiring it can be for adults to have to deal with tedious and irritating situations — an airport line is a perfect example. I also know how the demands of children can sometimes be the tipping point that drives adults into a rage. What I don’t understand is how some parents expect their children to be magically immune from the boredom and exasperation felt by adults. If waiting irritate adults, who have more resources to deal with their tempers, why can’t they understand it also irritates their kids, who have yet to learn such mechanisms? Why are so many kids brought to grownup places where long waits are the norm without toys or snacks to occupy them? Why do grownups act so much more like spoiled brats than kids do — kids who have every right to act like kids?

I sometimes feel like the masked avenger telling parents to tone it down, that their kids are just being kids. Looking back at the times when I was an impatient mother of young children, I wish someone had told me that. There are times when we need to be reminded that they’re just like us. No one at any age likes waiting. The fact that kids don’t have a deep booming voice to express how upset they are doesn’t make their feelings any less valid.