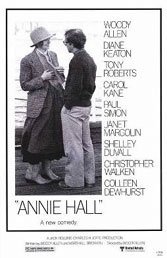 Allen’s romantic comedy exists in a world of its own. He orders neurosis to hold hands with romantic comedy and plops them both into his uniquely screwball Manhattan, trapped at the time between bankruptcy and feminism. This is an urban boy-meets-girl fable in which Allen’s trademark awkwardness (he’s a self-conscious Jew named Alvy Singer) finds its perfect foil, Midwest klutz Annie (pitch-perfect Diane Keaton). Both Alvy and Annie are quirky overflows of sexual liberation, which in the context of the 1970s meant being able to say and do more than ever without knowing just how to go about it peacefully. Their self-conscious mishaps make the mating dance all the more believable.

Allen always goes the extra comedic mile. He narrates and sticks subtitles under early small-talk; he lampoons intellectuals by getting Marshal McLuhan to make a guest appearance; he split-screens a family encounter; he won’t let love conquer insecurity, because it often doesn’t. As many one-liners as Allen gets (“Everything our parents said was good is bad. Sun, milk, red meat… college.”), the movie is really just about an unlikely love affair, with both a girl and a city — a city that at the time needed a whole lotta love.

Alvy gets the girl but the girl doesn’t turn into a princess. Annie loves the man but he isn’t enough. Allen and Keaton are ably backed up by a skit-cast that includes Tony Roberts, Carol Kane and Shelly Duvall. At one point Alvy, bereft of Annie, tries doing what he did with her with other women, including cooking up lobsters. It doesn’t work because the new woman isn’t Annie, simple proof of life and love. The closeout narration, in which Alvy rehashes an anecdote about relationships and eggs, may be Allen’s most poignant moment. A gentle, funny, compassionate, and often heartbreaking movie.

Allen had original intended this as a murder mystery, but redeployed it into comedy. He made up for that with the 1993 “Manhattan Murder Mystery,” which also starred Keaton. Signourney Weaver, a year before her “Alien” breakthrough, has a cameo as one of Alvy’s dates.