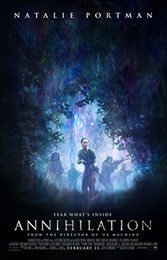 Having set this up, Garland shifts to the debrief-flashback formula, with Lena inside Area X, a military decontamination facility where she’s being interrogated as the sole survivor of a four-woman team tasked with entering “The Shimmer,” a quarantined zone of unknown origin that’s made a nest in a state park and has begun to spread. Kane, it turns out, was among the first ordered to enter it.

The bulk of the film is Lena, psychologist Dr. Ventress (ever-dour Jennifer Jason Leigh), Anya (Gina Rodriguez), Josie (Tess Thompson) and Cassie (Tuva Novotny) inside The Shimmer — an ever-mutating Garden of Eden that plays by its own cellular rules, disrupting what Lena early on calls “the rhythm of the dividing pair.” Matters of loyalty, guilt and paranoia are shaken and stirred by the enchanted forest’s genetic trickery.

Is The Shimmer a madness-inducing genetic refractory or a life form determined to acquire a human dimension, using Kane and Lena as test subjects? Garland tries answering these questions while using Ventress to punch holes in human nobility. “We’re all damaged goods here,” she says of the team, and later, “We have self-destruction in us, coded into each cell.” If so, how much mutation is alien and how much self-inflected?

A 20-minute light show climax suggests Garland has few answers and even less control over his provocative material. His one exceptional script, 2003’s “28 Days Later,” a plague fable, played out superbly in the hands of director Danny Boyle. Garland’s own directing debut, “Ex Macchina” (2014), was stimulating if overly ambition. Same here. Garland drowns in his own ideas but has only kaleidoscopic effects and an ominous if predictable final scene to show for them. Portman and Isaac are all but wasted, and “Annihilation” ends up annihilating itself, a long strange trip to no special avail.