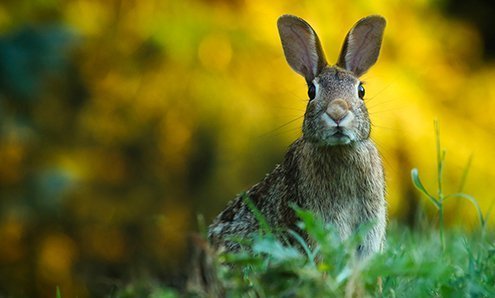 Zack is wearing a heavy black flannel when he makes his appeal to the narrator. Zack is in his bed in the dark. The boy is outside somewhere with the rabbit. Zack prays to the narrator and explains.

Zack explains that the story’s sad part happens at the start of the story: Zack crashed the golf cart. The course was within view of the lake. Blue Tahoe made the blue sky pale in contest. Zack drooled on himself when the golf cart flipped. His wife’s head landed nicely on the lobe of leg above his knee, when they tumbled out the upturned golf cart’s open side. A little spit came from her mouth too, and it slicked her chin and a patch of Astroturf beneath it, and her mouth hung slack and shining. Zack came to in just a little while. Zack was laughing. Zack was convinced when he lifted her head off his thigh that the blue blur from her temple to cheek was his old jeans’ indigo somehow staining her skin. The hemorrhage was bad. She died bad. Sadness.

The story’s real meat, Zack explains to the narrator, is this: Convenient that they had just moved to a cabin in the woods above the lake, and were not yet integrated in the community. Convenient that they had hired a sitter for the morning’s nine holes. Convenient that the son was still so young and a tyro to tragedy. When Zack’s wife had been delivered to the hospital she was DOA. Zack felt dizzy, and even dizzier when he thought of coming home to the boy alone. There was a pet store in Truckee. She had died in the middle of Saturday and everything was open. Zack brought home a rabbit and said, “Mommy turned into a bunny today.” The boy held the rabbit. The boy asked if she’d turn back sometimes. Zack said, “She didn’t think to mention it.” They sat on the floor. “This bunny doesn’t hop,” the boy said about the rabbit between them. “Do you remember mommy ever hopping?” Zack said. The boy thought for a while. “Yes,” the boy said.

Really, this, Zack explains, is the saddest part of the story: The boy talking to the bunny. The boy eating dinner with the bunny on the table beside him. The boy watching the bunny piss on the table, a puddle swelling out beneath its haunches. The boy scraping himself when he fell on the driveway and running inside to the bunny’s cage and lying curled around the cage with a finger inside on the bunny’s paw until the boy was feeling better. The boy standing and staring at the bunny with doubt.

By himself, one morning, the boy took the bunny to a clearing triangulated by several stands of pine, up the hill from the cabin, which the boy should not have been allowed to do. He put the bunny on the grass. Here on a ridge a roar could be heard, and on the lake, visible beyond the next stand, the boy saw a dozen speedboats weaving with thin, steely wakes crossing to celebrate the opening of summer season. The boy maneuvered to watch the boats whose sounds he could hear, moving up the hill so he could see over the boughs, and inside the cabin down below Zack lay in a heavy black flannel in the dark with Turkish towels hung on the windows like drapes to provide the darkness. It struck Zack as he lay there: the time the boy must have remembered when his mother had hopped. Must have been one summer ago. At Zack’s parents’ home in the East, at their three-floor colonial, for a BBQ on the Chesapeake. She was wearing a dress that he could touch the bottom of from behind without bending, and he did, to feel her thighs’ skin. She snuck Wild Turkey into the glass spine of her Coke, sweaty eggs of ice in its throat that would lilt when she, his wife, would lilt, leaning over the pier to look into the green tributary, until he — he who toward whom he could feel her burst, in love, with mindfuls of fistfuls of sexual wattage — appeared in white cotton gripping a PVC pipe and canned hair spray and a sack of potatoes.

He showed her how to launch potatoes from the pipe, the potato gun, over the daytime moon like striking homers over fence after fence, spraying the flammable aerosol down into the pipe, to be packed with one spud at a time, where, with the sparkplug punched, lodged firmly into the far end of the pipe, it would be murdered so completely. Fire actually belched from the muzzle, but only after the spud. It was summer, and she pushed her breasts into the shoulder of Zack, her husband, now this modest and new gatekeeper of violence. The next day he would show her how to fill a two liter bottle with dry ice and swamp water, vapor hissing off the ice, the pressure mounting in the sealed bottle, then lob that payload out into the depths past the pier, will it to make like dynamite and put a geyser so high it turned even the subaquatic concussive. But when it had been her turn to shoot a spud, the boy came running down the hill from the house where he’d been feeding bread to ducks and saw his mother hopping, and she was a little drunk and happy, and he’d hopped beside her, and then Zack gave her the pipe, and she shot it.

Zack lying in bed in black flannel thought about that afternoon, her hopping, and it was then that he decided to pray to the narrator, and he explained the story that began with his flipping the golf cart. Zack, having now brought the story to the present moment of lying in bed, the boy somewhere outside with the rabbit, makes his appeal to the narrator, thinks of his wife, and begs the narrator for some happy ending: The narrator offers to end the story, which could be a kind of happiness. Will the boy ever know? Will the rabbit ever die? This is the ending — but Zack is not ready.

But here’s the ending: Wait. Wait.

Please let the story end, the narrator believes. For the boy, explain she’s dead and let there be ending.

Zack is not ready to explain to the boy the nature of ending. Zack gets out of bed in his heavy black flannel. He walks outside, and he sees the boy coming down the hill without the bunny. They run to where the boy had forgotten the bunny in the grass in the triangulation in the pine stands while he’d watched boats on the lake. The bunny is gone. Zack is sweating. They can’t find her. The boy is huffing, silent, with panic. Zack is dizzy imagining being with the boy alone. Zack holds the boy and points to one pine a little ways away from one stand. He carries the boy to the pine. Zack says, “I almost forgot. Mommy woke me up last night. She said today she’d like to be a tree.” Zack puts his hand and the boy’s hand on the tree. Zack says, “Look at this new tree mommy is!” The boy stands and stares at the tree with doubt. “Have you ever seen this tree before?” Zack says. The boy thinks for a while. “Yes,” the boy says. “No,” Zack says. “Okay,” says the boy.

The narrator decrees that with the story’s next line, there will be happiness.

— Alexander Slotnick has lived in Virginia Beach, Reno, New York, and San Francisco. He is currently a fiction instructor, Henry Hoynes fellow, and MFA candidate at the University of Virginia.

About the Author: Alexander Slotnick