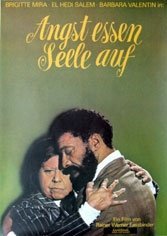 Xenophobic tensions burst when a white, postmenopausal cleaning lady falls for a much younger Moroccan boxer in 1974’s “Ali: Fear Eats the Soul.” Directed in unflinching, color-rich hyper-reality by prolific German Rainer Werner Fassbinder (1945-1982), the film uses a forbidden love story to help expose the racism that Fassbinder believed still lingered among Germans some 30 years after the end of the Nazi era.

Aging Emmi (Brigitte Mira) steps inside an immigrant bar one evening to escape the rain. Her lonesomeness attracts Ali (the somber-eyed El Hedi Ben Salem, Fassbinder’s then-lover), who asks Emmi to dance on a jealous dare from his Moroccan girlfriend. Dancing leads to talking, and talking leads to the discovery of a mutual sadness. Both feel like outcasts in their West German neighborhood. Despite the cruel ogling of Ali’s friends, the unlikely pair escapes that night to Emmi’s home. Without hesitation they later marry. The union nauseates all those in Emmi’s life: her adult son kicks in her television screen, and her coworkers stop talking to her. But since displacement brought the newlyweds together, discrimination only amplifies their love — until Emmi’s family and friends (without much explanation) start talking to her again.

The film’s full mystique emerges once Emmi regains the acceptance of her friends. It’s a tug-of-war between Emmi’s lifelong desire to be adored by her fellow Germans and Ali’s sense of complacency among his familiar Moroccan friends.

Perhaps the most affecting scene is when Emmi walks in on a naked Ali in the shower. She tells him in a whisper that he is beautiful, then shuts the door. In that quiet moment their innocence prevails over all else.