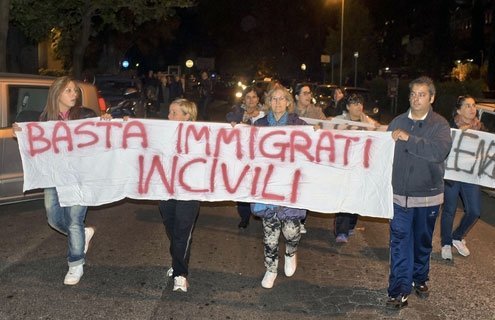 ne of things we noticed when we first arrived from England to live in our small town in Italy was the comparative lack of racial diversity. Our arrival coincided with that of two Moroccan families, and between us we seemed to change the fabric of the local school forever.

Political correctness, we quickly learned, had bypassed San Ginesio. Untoward comments, particularly toward the Moroccans (“He’s been out too long in the sun,” said the headmaster), while never meant unpleasantly, would have bought instant howls of outrage and probably a lawsuit in Britain. In the Le Marche they went unremarked.

Puzzled by the lack of information the school gave us at the start of the year, I asked a teacher why the staff didn’t even provide a list of what the children might need. Her reply was testy: “Well, we all know what the children need. We’ve never needed to tell the parents before but suddenly it’s an international school.”

Most of this was the voice of ignorance and unfamiliarity. But a decade has changed the tone of that voice, and not just in small towns. Immigration, long a political hot potato in Britain, has reached crisis-level proportions in Italy. Debate has turned heated and nasty. The number of immigrants is rising monthly, and so is the death toll.

Until recently, the Italian Navy patrolled the southern Mediterranean as part of the Mare Nostrum rescue program, saving an average of 400 people daily from rickety vessels. But budget cutbacks ended the program, and its EU replacement is far less extensive.

So far, despite a constantly intensifying stream of migration, mostly from Africa, government officials have provided little in the way of imaginative solutions. Whatever the answer, letting people drown isn’t among them.

The Italian populist idea, repeated endlessly, that immigrants steal jobs and live off the state simply isn’t accurate. A recently published study by University College London’s Centre for Research and Analysis of Migration suggested EU migrant arrivals to Britain between 2001 and 2011 actually contributed £20 billion to the economy. Many of the new arrivals were far more likely than British natives to be holding jobs, and thus less likely to be occupying social housing and claiming benefits.

If you’ve lived in Italy for any length of time, it’s impossibly not to notice the explosive increase in the size of the African population. An estimated 140,000 refugees have arrived between January and October alone, an 850 percent jump from the same period in 2013. The volume has frayed Italian patience. Not so much because Italians are any more racist than anyone else but because many of the new arrivals, at least the ones I see locally, loiter near supermarket car parks selling socks or hoping to grab euro coins from trolleys. It’s annoying for local residents, demoralizing for the refugees, and a ridiculous waste of human resources.

A solution to this is work: any kind of work. Getting new arrivals into basic jobs could help transform the relationship between immigrants and their new hosts, as well a potentially limit criminal activities. With Italian authorities already paying for immigrant detention centers (some of them appallingly maintained) and funding basic survival, why not insist on getting community service in return? A program of this kind could dignify the relationship between the immigrant and the state and help silence throbbing xenophobic mobs.

Immigrants aren’t on vacation. Desperation led them to pay for passage in small boats across dangerous stretches of sea with little knowledge of what lay in wait. And desperation isn’t rational.

EU authorities in Brussels can commission studies and make recommendations, but desperate people will keep making the journey. Violence and poverty are rife in North and Central Africa (and elsewhere) and the constant perils of getting to Europe can seem well worth taking. A boat full of migrants recently sank off the Turkish coast, killing 24 men, women and children. Such catastrophes seem to happen weekly (700 people drowned during one week in September).

Distressed, I asked my children what they thought we — what Italy — should do. Should we stop refugees from getting on the boats? Their answer: “No, just go and pick them up.”

It’s the only possibly humanitarian reply, especially when Western foreign policy, conditioned by greed and anti-terrorist concerns, often exasperates domestic situations in the countries the migrants are fleeing.

Interning and deporting migrants isn’t a solution, since many feel they have nothing to lose and will start the journey again. The best solution is finding ways to let them to contribute to their new society, and using recession as an excuse is no excuse. Many jobs need doing and are left undone by Italians. Put the new arrivals to work. Give dignity a chance.