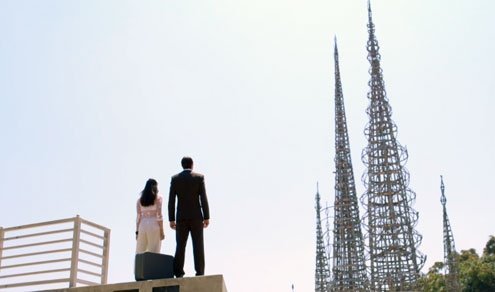 os Angeles has never lacked for critics. In “On the Road,” Jack Kerouac starkly called it “the loneliest and most brutal of American cities.” Dorothy Parker refused to take it seriously. “Los Angeles,” she wrote, “is 72 suburbs in search of a city.” That city is a maze-like sprawl with bumper-to-bumper freeway traffic camped under scorching sun, one that lacks a real center — an anathema for Europeans, who generally prefer San Francisco. Entertainment its only real industry, a shallow claim to fame.

Though you can’t contest those realities, I always sensed that there was something more about L.A., something authentic and extraordinary. I lived there for a few years and tried my best to defend it from its detractors. Thankfully, a very short but eccentrically stylish film now helps bear me out.

The 39-year-old MacLennan merges Calvino’s sense of the surreal with walks taken by actress and fashion blogger Marta Pozzan and actor Pierson Fode to L.A.’s familiar and exotic sights (the Watts Tower downtown and the improbable Angels Flight funicular railway). The sights are juxtaposed with haunting, make-believe conversations between the Kubla Kahn and Marco Polo that framed Calvino’s book, with Pozzan playing both roles in his film.

Though the well-traveled MacLennan has advertising industry roots — he’s made commercial videos for Fila, Simantec and Google — he also has a knack for smaller and more focused intellectual projects, which he funds himself.

The Stanford and USC-educated MacLennan says the “Invisible City” project got started when his father-in-law Martin McLaughlin, an Oxford Italian literature professor and a noted Calvino translator, suggested he read “America Diary,” a compilation of letters that Calvino sent to various Italian friends while making a six-month cross country trip between 1959 and 1960. At the time, MacLaughlin had just completed the translation of hundreds of Calvino letters later published as “Calvino: Letters, 1941-1985.”

Calvino was in 30s while in the U.S. and mostly enthralled by what he called his “New World” adventures. But he found little joy in Los Angeles, which he compared unfavorably to New York. Fascinated but repulsed, he labeled it “the impossible city” and struggled to come to grips with life in Southern California. “Fortunately America is not all an artificial-natural paradise like California here,” he wrote from L.A. in 1960, adding: “Life [in Los Angeles] is impossible, more impossible than in any other place in America, and for the temporary visitor, it is actually a source of despair. ” Calvino blamed the trouble on the city’s “lack of soul.” For him, it was less a city than “something structural.”

MacLennan found the observations intriguing. “I thought it’d be interesting to fuse [Calvino’s] observations about L.A. with part of the text of ‘Invisible City,’ in which Marco Polo and Kublai Khan meet. To me, Los Angeles is also an invisible city because it has no visible center, no landscape, but that doesn’t make it any less worth exploring.”

In the novel, Marco Polo tells the aging Kubla Khan about the fantastic cities he’s passed through during his eastward travels. In the short film, Oxford scholar McLaughlin provides voiceovers from the novel to help give L.A. its own fantastical dimension. Beyond endless traffic, incomprehensible sprawl, and movie industry comings and goings, L.A. is rendered as a “character” in its own fable.

The film is very MacLennan-esque. He’s a man captivated by intellectual challenges. When naming a new TV show came up at a recent dinner, he dove into the possibilities with gusto. Conversation moved on. But that didn’t stop MacLennan, who stuck with the theme, spewing out title ideas throughout the evening. He doesn’t quit.

MacLennan’s brief “Invisible City” conveys a sense of flair and mystery that critics either ignore or pretend that L.A. doesn’t — and can’t — have. His images give a heartbeat to the city Calvino once dismissed as an “agglomeration of people.”