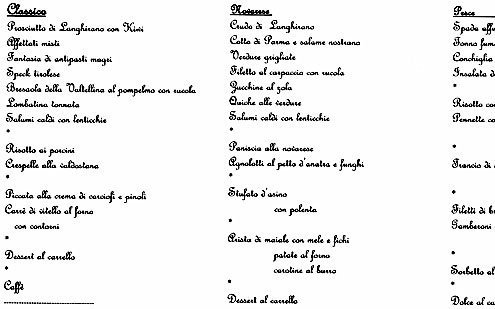 ngelo has the scared-rabbit look. It could be raining in the bedroom. On his sheets. On his children. Raining. How could that be? But that’s the look. Bewilderment with a pinch of panic.

Angelo is from the Abruzzo, where cooks are harvested, the way he put it when we first met 20 years ago. Pure cooks. I puri. He’d wag his hands from side to side like a Mandarin soothsayer enriching the size of a fish.

Doctor Winner, you know what we say? We say… and all I got were the words “weather” and “goats.”

How, I asked, does weather involved the goats?

That’s the point, he said.

And so it went. Then.

Now, Angelo’s weather is bad. He was a waiter in one restaurant for three decades — acquiring fans as one waiter can — only to do what you don’t do here: walk away. Leaving work is bad luck in Italy. It begs the notion that if your one bright idea doesn’t work, you’re finished.

This in turn emerges from an enduring assumption that everyone wants your job because there aren’t enough to go around. So you look alive.

I once knew a high-level press officer so weighed down by the mathematics of conspiracy that he rarely left the office. “Never leave your poltrona,” he warned me, “because there are others waiting to take it.” An odd man. But when the florist said the same thing I resigned myself.

But Angelo? Why leave? The ducks (not goats) were aligned: Steady work in a respected place; customers who knew and responded to the anecdotes, and the weather reports.

But no, Angelo wanted to be… first, a limousine driver. Then, he wanted to start his own place. I’m not getting any younger (40), he said, so why not now? That was the early 90s. Doctor Winner, he said, you know what we say about music and worms…

The adventure went bust. No one wanted his limo skills and the later bar-restaurant idea faltered the way such things do. Few crunch the numbers right. A restaurant is bitter-pill work.

We were out of touch for a decade.

But Italy being Italy, a decade is two weeks in a short month. If you don’t die, it’s a brief stretch.

So here he is, in my newest occasional restaurant, with the scared rabbit look. Painful. As painful as his being made to wear a little red uniform that makes him seem like retired fireman at a second-rate parade.

Nothing worked out, he says wanly. At a quarter past 50, he needs to scare up a salary. The old place won’t take me back, he says. They’ve hired new young people.

Happens, I tell him.

I await an anecdote that doesn’t come. He’s mellowed toward the dire.

Will they keep me here? he asks. I’ve tried out in three other places.

Why wouldn’t they? I respond. Forced cheer doesn’t suit me but I try. You’re a good man. You know about weather and goats and worms. I smile. He doesn’t understand or doesn’t remember.

I look at him again: he’s terrified.

Anxiety has an allergic component, a rash under the eyes, a slowness of speech.

What are you so worried about? Relax.

He greets this with a pause, then a whisper: the computers, he says. It’s like a spilled secret, the name of an assassin. The computers, Doctor Winner. I don’t know how to use them.

So no, it’s not about goats.

This restaurant, with its mostly 20-something contingent of waiters (several sleek Romanians who speak exceptional Italian), has dispensed with pad and pen. A customer’s order (based on table numbers, not client name) is touch-screened to a pad that has icons for bread and wine, pasta and meat. The keys glow, steaks in yellow and blood red. The system won’t produce a receipt until you tote the items and match them to the correct table. It’s simple enough.

Around these devices, he seems dead.

The new young waiters speak English, a little or a little more, but enough. The Romanians are magic bullets: they talk, a few of them, like UN envoys. They enunciate what Americans fail to. Angelo doesn’t speak a word of anything but his home brew.

So many tourists here, he says, and the capo wants me to speak English.

Don’t worry, Angelo, I plead. Relax. Do your work. You’re a waiter. You’re good with people. It’ll all be fine.

But the scared rabbit look returns. Wind and lions in the kitchen. A bad wizard lurking in a olive grove. Things displaced for good.

Dai, I say. The world changes: sometimes a little, sometimes a lot. When I met you, I wrote on a typewriter. Now, I do the computer. I have to. It’s not hard. It’s practice.

Angelo softens. He smiles faintly. He nods. He wants to agree.

He shuffles to get someone’s pasta. I watch the still-deft movement of a man in the practiced company of food, precious food. At one point, he even laughs.

I’m relieved for him, and hopeful.