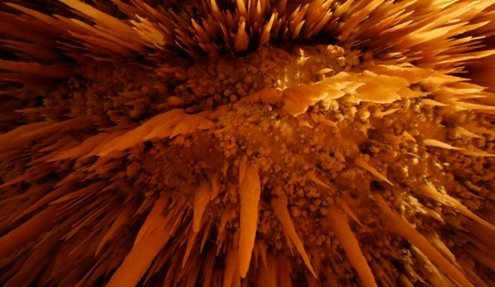 Each cave has its own significance. Photos by Matt Fiorentino.
&

#8220;We call this the cave of the mother-in-law,” says our tour guide in a German accent as we enter the massive cavern that a mile later opens into what locals claim is the most beautiful cave in the world. “We call it by this name,” he says pointing at the gaping hole in the roof of the chamber, “because the locals would toss all unwanted mothers-in-law down into the abyss, meaning, of course, that once you got married your mother was doomed.”

Le Grotte di Castellana, 40 kilometers south of Bari, the Adriatic seaport in southeast Italy, are more than just good places to stash your mother-in-law. They’re also beautiful and terrifying. Before their excavation in 1938, Puglia folklore had a field day with the prehistoric limestone system: it was, legend said, an entrance to hell, a purgatory for lost souls, a dormitory for ghosts and goblins, a dungeon guarded by a horrible creature where a beautiful Italian damsel lay imprisoned. Courageous young men from nearby towns dipped into the craggy abyss looking to slay a beast and earn the admiration (and more) of the damsel in distress.

But they found neither beasts nor damsels.

Barely inside, they found screeching birds, bats, and owls. To humor their fears, the locals came up with scatological fables. In one, a villain who stole from his blind brother was swallowed into the caves as punishment. It’s not clear if the blind brother was ever told about the anatomical “hole” into which his treacherous sibling had fallen.

Besides their mystical and magical properties, the caves also served as a mundane dumping ground for trash and even corpses. By the time explorations of the caves began, 39 feet of rubbish had accumulated in the 160-foot shaft. Not to mention eight bodies.

As provincial as local superstition might seem, climbing down into this underworld wonderland (276 steps) makes you feel like you’ve stumbled on Dante’s first circle. Lucifer himself couldn’t have created a better welcome mat. The entrance cave is the size of a football field.

Thankfully, you get a guide, a path, and, most important, light.

Spelunker Franco Anelli had few such luxuries. The first person to explore the caves, Anelli was lowered into the depths on a freezing morning in January 1938 with only rope ladders, safety belts, topographical tools, and cameras. To reach the bottom, Anelli, 39, strung together three rope ladders and scuttled along pitch black walls for hours before discovering a small passageway that led to the first cave.

It was then that Anelli unknowingly found what American intelligence officials began looking for 60 years later. Beside two formations that look like a cactus and an elephant (or a castle), is a stalagmite “camel” with an extra hump. “The extra hump is bin Laden,” our guide says sotto voce. “But please don’t tell anyone. We don’t want them bombing our caves.”

Coming on “Dante’s Inferno,” a cavern that looks like it should have glowing red pitch forks as decoration, we’re told, “We’re going into hell, so we have to go to the right now.” Hell is to the right, get it? Much to the delight of German and British tourists, Italians bear the brunt of heavy-handed quips. “Send your mortal enemies here on Ferragosto, August 15th — we get over a 1,000 Italians an hour.”

The 135-million-year-old caves suit all tastes. Besides bin Laden’s camel and Dante’s Inferno, there’s an owl, a jellyfish, bacon, and an ice cream cone. Elsewhere is the leaning tower of Pisa, the female wolf of Rome, the Virgin Mary (who looks like she’s giving le corne), and a cavern — dubbed “Curtains” — that suggests female genitalia. A “World Cup” cave (“We stole it from France!”) was “acquired” in 2006, when Italy won the title.

Appropriately enough, a final formation gives you the finger as you leave. Who says you’re coming back?

It’s hard to argue. Pearly white spikes pierce the ceiling, icicles drip down the length of the walls, and rocks shaped like carrots ooze from the floor.

Almost imperceptible is a four-inch-tall stalagmite that the guide says is dubbed “The Candle” because of its wick. “Four million years in the process. If you touch it, it dies.”

Getting there from Bari: board the F.S.E. rail line (left side of the station when facing the tracks) to Le Grotte di Castellana. Get off at the Grotte stop (not Castellana). Trains run 12 times daily and once on Sunday. Tours daily. High season: hourly, 9-11 a.m.; 12, 3, 4, 5, 6 p.m. Low season 10 a.m., 12 p.m. English-language tours run from11 a.m and 4 p.m daily. The cave site contains bilingual tips as well as local lodging possibilities.