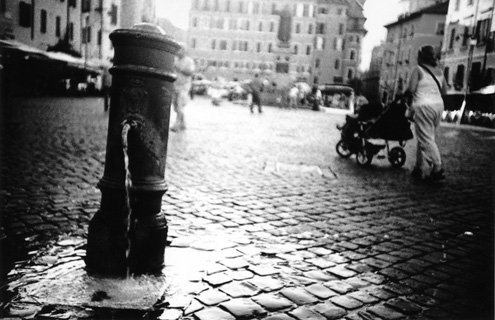 e think of Italy as an ageless land, existing as a boot since before Jesus. Italy brought us the first Republic during the Roman Empire; it brought running water to the city center; it sent the roots of modern language to England through military occupation. We got the poet-laureate from Italians, and along with it that cool laurel headpiece we wear to toga parties, we got sonnets from them, the telescope, and believe it or not, forks. Italy brought us linear perspective art during the Renaissance, which naturalized the human form on canvas and enabled subsequent movements to re-distort it.

But none of these is truly Italian. Or better, their Italian-ness depends on your definition of “Italy.” Do you mean it as a political state or as a physical place? Though we may freely link Italy with Old World accomplishments, the Italy we know only became a unified country in the 1860s. We must thus qualify the previous information. Rome should be called Rome, not Italy. Speaking “Italian” is a modern occurrence (don’t get me started on the youth of the Italian language). Likewise, Venice and Florence were both independent city-states for most of their history. They entered the fold recently.

While Italy is a relatively newcomer to household globes, the concept of “Italy” as a nation is even newer to citizens of the recently cobbled boot. Nationalist sentiment began developing under Mussolini in the 1920s (some argue they never developed far, bearing in mind today’s Lega Nord, Roman hatred for the Milanese, bitter debates Carbonara over recipes, etc.).

To get to my story you must first compound massive socio-political change with the technological advances of the last 120 years, then compress the same 120 years into 60, since much of Italy enjoyed few Industrial Revolution luxuries (electricity, indoor plumbing) before Mussolini. Once you have processed these changes and considered that nationally, linguistically, and technologically Italy has seen mind-boggling changes in the span of one lifetime, you have to add two wars. Finally, you need to focus your lens on Rome.

Now zoom in on just one lifetime. What must La Nonna think of it all? La Nonna is Andreina, a nightly visitor to Restaurant X where I work at Campo de’ Fiori. The bashful old bird won’t concede her age, but her daughter once told me she is 87. That means she was born (in the Campo de’ Fiori apartment where she still lives) in 1921. As a girl the Coliseum was a wild garden of interest only to a few botanists, the Forum was under layers of earth, Campo de’ Fiori itself was a forgotten village square, dangerous after dark until the 1990s.

She doesn’t talk about her life and if you ask her questions she’s evasive. But one night she brought a journalist as a dinner companion. He was interviewing her about the Fellini movies she had acted in. She didn’t remember which ones, but he knew (though he wouldn’t disclose), and he pumped her, as a kind of rare living relic, for information.

I know from watching her that she’s from an age when Italians still drank only tap water. She loves soccer, is intensely afraid of candles, and she finishes every meal with a cigarette. I often wonder what she’s thinking as she sits under a knitted cap that barely conceals her sparse hair. She finishes her meal as Open Bar starts on Tuesday night, the DJ pumping rap and house music in the presence of belligerently litigious and amorous foreign co-eds thousands of miles from home. They’re dressed in what to her must look like undergarments. Around her, huge TV screens play one bawdy music video after another.

What could her life experience tell me? She who has actually been the fly on the wall. She grew up a peasant in this square, which was her backyard and playground. Then it changed. For a time, Axis forces patrolled it when Rome was a wartime Open City. Maybe she was already a film actress then; maybe she even acted with Anna Magnani in the 1943 film, “Campo de’ Fiori.” Again it changed and she lived La Dolce Vita in the late 1950s and into the 60s. Now every night she watches globalization unfold outside her window.

Campo de’ Fiori, the anonymous market where she was sent, barefoot, to buy tomatoes as a girl is now in every international guidebook. How can she fathom any of it? Maybe she doesn’t. Maybe TV and reality blend into a larger unreality and she pretends she’s reliving her acting years. Or maybe like the Roman she is, she just says Boh.