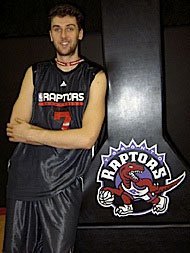 Bargnani is averaging 10.3 points so far this season.

Andrea Bargnani is still searching for his groove. He stretches and works out late. He doesn’t talk much. He likes his new home, more or less. He doesn’t miss Alitalia. He’s happy Toronto doesn’t have away games in the Balkans.

The top pick in the National Basketball Association’s draft is settling into Toronto, where he plays for the Raptors, the much-maligned franchise that turned to a seven-foot Rome native with a sublime jump shot to help revive its fortunes. He is the first Italian to reap the full benefits of basketball globalization.

What the laconic Bargnani can tell you about life so far is that the leg room on the Raptors’ chartered jet is a definite improvement over Alitalia, which is more at home with five-foot-eight businessmen traveling the Milan-Rome shuttle. “We travel in a very nice airplane,” Bargnani says. “It’s really no problem at all.”

What about Canada and the Raptors? Is it so different from his days with Benetton Treviso in basketball-loving north Italy?

Bargnani says the North American game is safer. “In Greece, sometimes it’s dangerous,” he says. “They throw money at you, coins. It’s more violent.” He speaks softly, deliberate with his English. He is amused by my reactions. The corners of his mouth slip slightly into his beard as he continues. “On some courts, they spit on you… So it’s different.”

He says North American fans are more polite, but he’s too courteous to call them reserved. “Here, they love the game in a good way. Just, in a good way.”

Despite these new comforts, it can’t be easy being the first European picked number one pick in the draft. Magic Johnson and Shaquille O’Neal were first picks. So was Chinese superstar Yao Ming. It sets a high standard.

All are watching to see how Bargnani performs. The Italian media pack came to town for his debut. He doesn’t have long to prove himself. Maybe a season. Commentators are already comparing him to Dirk Nowitzki, the German seven-footer who paced the Dallas Mavericks to the NBA finals last spring. “He’s a better player than I was when I was 19 or 20,” Nowitzki said recently. “He’s going to be a heck of a player.” Fewer remember that Nowitzki started slowly. Even Yao sometimes looked silly in his first year in Houston.

A dozen games into the season, Bargnani is managing. He hasn’t had much court time, but he’s shown promise. Screwed up a few times. Racked up some strong games in December. It’s a start. At midseason, he’s averaging 10.3 points per game on modest 40 percent shooting. “I’m working good here in Toronto,” Bargnani says. “I realize that in my career there are a lot of expectations on me, so I’m used to it.”

Bargnani got started in basketball at six. Already he was taller than the other kids. At 16, Benetton Treviso signed him to a sort of apprenticeship contract and began to groom him — a common practice among European club teams. He moved into a dorm on the team’s campus, went to school there, practiced twice a day. By 18, he was starting in A-1, Italy’s top league. His silky jumper became a trademark.

But the NBA isn’t the Veneto. Players are bigger; contact is rougher. He admits he’s had to make adjustments. “Some rules are different from Europe and, of course, the level of the game is much higher, the athleticism is much higher, so it is different.”

He lingers at the Raptors’ gym after practice longer than most of his teammates, rigorously stretching, lifting weights. “Here we practice early in the morning and in Europe we practice in the afternoon. It’s the small things that make the difference.”

Toronto also affords novelties. The food, for starters. He’s tried Chinatown twice, prefers the city’s finer Italian joints. He drives an SUV. He lives in a high-rise condo on the lake. His mother came to Toronto to get him settled in, but now he’s on his own.

And then there’s the language. Bargnani’s English is good, but still he chooses his words carefully. And he’s economical with them.

The Raptors hope that Bargnani’s presence will help attract Toronto’s large Italian community, convince some of them there’s more to sports than soccer and hockey. But the schedule and practices work against public relations. “I don’t have time. We always practice,” he says.

Fortunately, the Raptors are an international franchise. There’s Spaniard Jose Calderon and Slovenians Rasho Nesterovic and Uros Slokar. Assistant GM Maurizio Gherardini ran Benetton until the summer. And Spaniard Jorge Garbajosa was Bargnani’s teammate on that roster for a year. “[Garbajosa] always helps me out, like a big brother,” Bargnani says. “But even the American players are good teammates.”

He’s confident the small differences in Toronto are just that — insignificant in the end — because he is at home in the game. It’s where he has lived since childhood. “Basketball is basketball. It’s the same everywhere. You just have to get used to things.”